Reporting under the Water Convention and SDG indicator 6.5.2

The reporting under the Convention was introduced in 2015 through decision (VII/2) at the 7th session of the Meeting of the Parties to the Water Convention. This coincided with the adoption of the Sustainable Development Goals and their targets in 2015. SDG target 6.5 calls for countries to implement integrated water resources management at all levels, including through transboundary cooperation as appropriate. Indicator 6.5.2, defined as the “proportion of transboundary basin area with an operational arrangement for water cooperation”, was agreed by the United Nations Statistical Commission in March 2016 and was subsequently adopted in July 2017 by the General Assembly as part of the Global indicator framework for the Sustainable Development Goals and targets of the 2030 Agenda for Sustainable Development. UNECE and UNESCO were designated as custodian agencies for the indicator. In order to maximize synergies and efficiencies, it was decided to combine the reporting under the Convention and the reporting on indicator 6.5.2.

In the first reporting cycle held in 2017-2018, 107 out of 153 countries sharing transboundary waters responded to the invitation to report on SDG indicator 6.5.2 by UNECE and UNESCO. 38 out of 40 Parties responded to the request to report under the Water Convention. This high response rate offers a solid foundation upon which to ensure that reporting fulfils its potential as an effective means to monitor and focus efforts towards enhanced transboundary water cooperation and sustainable development.

The review of the first reporting exercise under the Water Convention and SDG 6.5.2 was conducted in 2018. The national reports provide country-led and evidence-based data to inform global policy dialogues on the sustainable development goals and transboundary cooperation, including the SDG 6 Synthesis Report 2018 on Water and Sanitation; the 2018 UN SDG Report; the UN Statistical Commission’s SDG indicators database; a joint publication by UNECE and UNESCO on behalf of UN-Water, ‘Progress on transboundary water cooperation: Global baseline for SDG indicator 6.5.2’ and ‘Progress on Transboundary Water Cooperation under the Water Convention’.

During the second reporting exercise held in 2020/2021, 129 out of 153 countries sharing transboundary waters responded to the invitation to report on SDG indicator 6.5.2. All Parties submitted their national reports under the Water Convention. This increase in the response rate compared to the first reporting exercise represents an important milestone for further improvements in transboundary water cooperation on a global level. It shows that countries have responded positively to the second monitoring exercise and that reporting is viewed as an important tool for advancing water cooperation and sustainable development.

The review and analysis of the information submitted during the second reporting exercise has now been completed. The data transmitted through the national reports has been the main source of information for the production of the joint UNECE-UNESCO second report on the Progress on Transboundary Water Cooperation: Global status of SDG indicator 6.5.2 and acceleration needs, 2021 on behalf of UN Water and the second report on the Progress on transboundary water cooperation under the water convention: Second report on implementation of the Convention on the Protection and Use of Transboundary Watercourses and International Lakes, 2017–2020 (forthcoming). Furthermore, the second reporting round has informed global policy dialogues on the SDGs by providing inputs to the Summary Progress Update 2021: SDG 6 – Water and Sanitation for All, the SDG 6 Data portal, the 2021 UN SDG Report and the UN Statistical Commission’s SDG indicators database.

Future reporting exercises cycles and support to the reporting process

Reports will be submitted by 30 June triennially, with the second cycle to take place in 2020.

In 2018, the 8th session of the Meeting of the parties adopted a revised template for reporting [ENG, FRE, RUS, SPA] together with the decision on reporting (ECE/MP.WAT/2018/5).

II. Reporting under the Convention

II. A. - Decision on reporting under the Water Convention

Transboundary water management is well reflected at the national level.

Several provisions of the Water Convention, including the adoption of joint water quality standards, provisions related to the prevention of accidental pollution and extreme events, and public participation in transboundary waters management do not appear to be widely implemented at the basin level. There is a widespread and concerted effort to implement agreements and arrangements for transboundary waters.


Where agreements and arrangements are in place nearly all of them provide for the establishment of a joint body, with the most common type consisting of a basin commission or similar. These joint bodies tend to cover the majority of the key tasks and activities mentioned in the Water Convention, although tasks and activities related to maintaining joint pollution inventories, setting emission limits, climate change adaptation and public participation are less well represented in these bodies.
III. Reporting under SDG Indicator 6.5.2

Pursuant to the 2030 Agenda for Sustainable Development, the international community has agreed to ‘implement integrated water resources management at all levels, including through transboundary cooperation as appropriate’ by 2030 (SDG target 6.5). This target supports the wider goal of ensuring the availability and sustainable management of water and sanitation for all (SDG 6); the monitoring and implementation of which is supported by UN Water’s Integrated Monitoring of Water and Sanitation-Related SDG Targets, more specifically by the (GEMI component).

Progress towards SDG target 6.5, is monitored through two indicators SDG Indicator 6.5.1 tracks the degree of implementation of integrated water resources management at all levels. SDG Indicator 6.5.2 is specific to transboundary water cooperation (6.5.2) and measures the ‘proportion of transboundary basin area within a country covered by an operational arrangement for water cooperation’, including the area of both river and lake basins and aquifers.

For an agreement or arrangement to be considered operational, the following criteria need to be fulfilled:

There is a joint body, joint mechanism or commission (e.g. a river basin organization) for transboundary cooperation; There are regular (at least once a per year) formal communications between riparian countries in form of meetings (either at the political of technical level); There is a joint or coordinated water management plan(s), or joint objectives have been set; There is a regular (at least once per year) exchange of data and information.

Over the course of 2017 and 2018, a total of 107 out of 153  countries sharing transboundary waters responded to the invitation to report on SDG indicator 6.5.2 which allowed to establish the baseline for this indicator. The assessment of the data submitted provides a picture of transboundary water cooperation across the globe, shedding light especially on the gaps present in the baseline assessment. Results of the initial reporting exercise, and subsequent updates, are available via the UN Statistical Commission’s SDG Indicators Global Database. UNECE and UNESCO  also jointly published an analytical report on SDG 6.5.2, available here.

For more information visit www.sdg6monitoring.org/ and the E-Handbook on SDG Indicators on Indicator 6.5.2.

As custodian agencies, UNECE and UNESCO invite all countries sharing transboundary waters to track their progress on transboundary cooperation and to report on their national value for SDG indicator 6.5.2. Both agencies, with the support of GEMI, are responsible for communicating with countries and coordinating country data, reviewing and validating data (where applicable), streamlining and disseminating results to countries, international agencies and other stakeholders. Guidance is provided to countries in many ways through technical support and capacity-building with regional and sub-regional workshops and guidance materials supporting the reporting process. 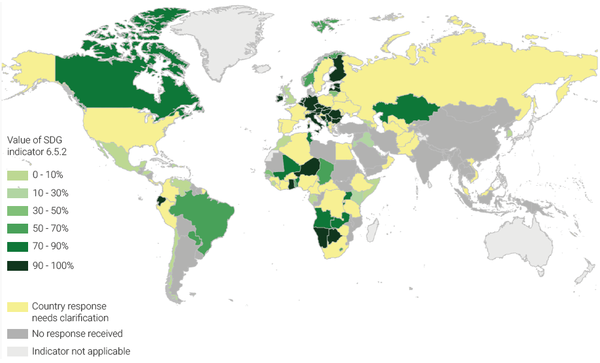 In some regions and basins, significant progress has been made to further transboundary water cooperation through operational arrangements. Progress is particu­larly advanced in Europe and Northern America, and in most major river and lake basins in sub-Saharan Africa. Regional legal frameworks, such as the EU Water Framework Directive and the Revised SADC Protocol, have proven to be important drivers of transboundary water cooperation.

If target 6.5 is to be achieved by 2030, progress must be accelerated and all transboundary basins must be covered by an operational arrangement. At the current rate of progress, with on average three agreements entered into per year, we are not on track to achieve target 6.5. 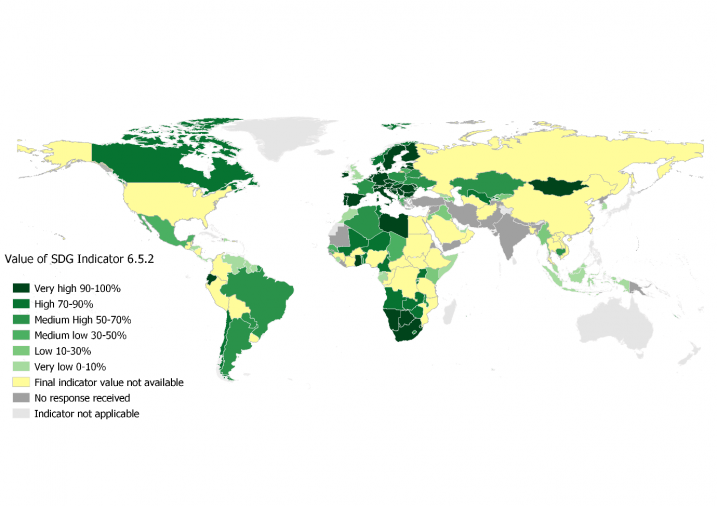 Transboundary waters account for 60 per cent of the world’s freshwater flows and 153 countries have territory within at least one of the 286 transboundary river and lake basins and 592 transboundary aquifer systems. Cooperation over these waters offers multiple benefits and is an important contributor to many SDGs.

129 out of 153 countries sharing transboundary basins (rivers, lakes and aquifers) submitted reports, compared with 107 in 2017. Despite the COVID-19 pandemic, this shows that countries have responded extremely positively to the second monitoring exercise, which is in itself a positive sign of country commitment to transboundary water cooperation at the global level. Greater engagement has improved data quality.

In line with the United Nations Decade of Action and the SDG 6 Global Acceleration Framework, efforts should focus on a number of key acceleration areas, including addressing data gaps, upscaling capacity development, capitalizing on the global water conventions and draft articles on the law of transboundary aquifer, mobilizing political will, mainstreaming transboundary cooperation into national IWRM and other related sectoral actions, improving financing and leveraging and mobilizing expertise

Please find the videos of SDG indicator 6.5.2 webinars at:

SDG indicator 6.5.2 measures the “proportion of transboundary basin area within a country covered by an operational arrangement for water cooperation”.

The reporting template for the 2nd exercise together with the Step-by-step methodology for SDG indicator 6.5.2 (version 2020) as well as the Guide to reporting are available in English, French, Russian and Spanish below.

In case of questions, please contact the co-custodian agencies helpdesks:


Complementary information is available at UN-Water webpage on SDG indicator 6.5.2.