Major industrial accidents may cause far-reaching transboundary effects and may lead to accidental water pollution. Even small amounts of hazardous substances released into waters can cause significant environmental damage with far-reaching effects, especially when transboundary river and lake basins are affected. These risks can be aggravated by increased frequency and intensity of extreme weather events due to climate change. The so-called “natural hazard triggering technological” (“NaTech”) risks, whereby environmental disasters such as floods or earthquakes trigger major accidents at industrial sites or other technological facilities, are thus also increased. These accidents place significant pressure on emergency response services, governments, businesses, industry and communities, both within and across country borders. According to UN Water, the 263 transboundary lake and river basins worldwide cover almost half of the Earth’s surface. 145 states have territory in these basins, and 30 countries lie entirely within them. There are approximately 300 transboundary aquifers, helping to serve 2 billion people who depend on groundwater. Transboundary lake and river basins account for an estimated 60 per cent of global freshwater flow and are home to 40 per cent of the world’s population. The severe consequences of accidental transboundary water pollution have been illustrated by a number of major industrial accidents in Europe and Central Asia, including the Sandoz accident (Switzerland, 1986), Baia Mare disaster (Romania, 2000) and the Ridder accident (Kazakhstan, 2016). 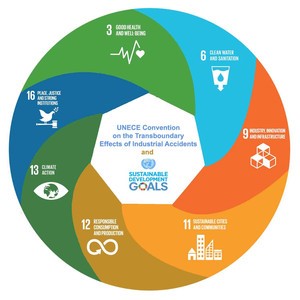 Development and implementation of joint policies on industrial safety, water management and risk reduction are important steps towards the implementation of Agenda 2030, particularly the four priorities for action under the Sendai Framework for Disaster Risk Reduction 2015-2030 and the targets and indicators of the 17 United Nations Sustainable Development Goals, as well as the relevant legal provisions of the Convention on the Protection and Use of Transboundary Watercourses and International Lakes and the Convention on the Transboundary Effects of Industrial Accidents. For these reasons, the Signatories to the Industrial Accidents Convention and the Parties to the Water Convention decided in 1998 to cooperate on issues related to the prevention of accidental pollution of transboundary waters. They do this through the Conventions' Joint Expert Group of the Water and Industrial Accidents Convention.
Subscribe
Last update date: January 14, 2022