The implementation of the Protocol on Water and Health requires setting firm targets in the areas defined by paragraph 2 (a) to (n) of the article 6 of the Protocol. The process of target-setting entails analyzing the national situation, streamlining and harmonizing responsibilities and commitments in water and health. A realistic plan for improvement, with prioritized time-bound targets adapted to the national situation, must be elaborated. When complying with Protocol’s provisions, Parties are encouraged to tailor their targets accordingly to the country-specific problems.
The progress in setting targets and implementing the Protocol is assessed on the basis of summary reports provided by Parties. According to the article 7 of the Protocol, Parties shall collect and evaluate data on their progress towards the achievement of the targets and on indicators designed to show how that progress has contributed towards preventing, controlling or reducing water-related disease 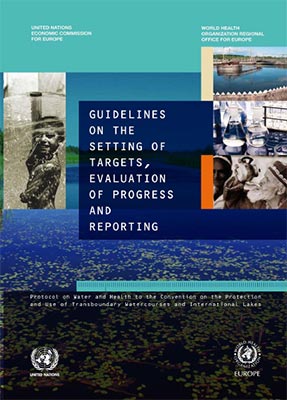 
Consultations do not have an inquisitive nature, and will be initiated by a request from a Party. Sessions can be held in confidence, if so requested. More information is available at the Terms of Reference of the consultation process adopted by the Committee at its 6th session. The second reporting exercise in accordance with article 7 of the Protocol was held based in 2012/2013 on the decision of the Working Group on Water and Health at its fifth meeting (see ECE/MP.WH/WG.1/2013/2−EUDCE/1206123/3.1/2013/MOP-3/09).The outcomes of the reporting cycle demonstrated increased compliance with the guidelines and template for summary reports and improved overall quality of submitted reports as compared with the pilot reporting exercise conducted in 2009−2010.