Water and adaptation to climate change

Impacts of climate change and variability on transboundary basins are evident in many regions in the world and increasing floods and droughts pose a challenge to water managers around the globe. Transboundary cooperation in adaptation is necessary to prevent maladaptation and increase the overall effectiveness of adaptation. The Water Convention and its Task Force on Water and Climate, led by the Netherlands and Switzerland, support countries in developing transboundary adaptation strategies and implementation of priority adaptation measures though guidance, projects on the ground and exchange of experience.

The Guidance on Water and Adaptation to Climate Change, adopted by the Meeting of the Parties and published in 2009, is still relevant and provides step-by-step advice on how to adapt to climate change, with a special focus on transboundary basins.

The Guidance on Water Supply and Sanitation in Extreme Weather Events, prepared under the Protocol on Water and Health and published in 2011, illustrates effective ways to minimize impacts of extreme weather events on water and sanitation and related health risks.

A collection of lessons learned and good practices on climate change adaptation in transboundary basins was developed in 2013-2015 as a complement to the Guidance on Water and Adaptation to Climate Change in cooperation with the International Network of Basins Organizations (INBO) as well as other partners. The publication intends to compile, analyse and disseminate experiences, and thereby to demonstrate and illustrate important steps and lessons learned as well as good practices to take into account when developing a climate change adaptation strategy for water management in the basin or transboundary context. 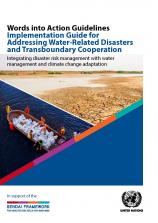 The Implementation Guide for Addressing Water-Related Disasters and Transboundary Cooperation was developed in 2016-2018 by a multidisciplinary drafting group in collaboration with UNDRR to support implementation of the Sendai Framework for Disaster Risk Reduction 2015-2030 and provides practical and evidence-based advice on integrating disaster risk management with water management and climate change adaptation. The Sendai Framework, adopted at the Third United Nations World Conference on Disaster Risk Reduction in March 2015, stresses the importance of transboundary cooperation. A number of targeted Sendai Framework implementation guides are being developed at the moment, including the Words into Action guide on water and climate change.

The programme of pilot projects started in 2010, it aims at strengthening the capacity to adapt to climate change and to create positive examples demonstrating the benefits of transboundary cooperation in adaptation planning and implementation. They include joint impact and vulnerability assessment as well as development and implementation of a basin-wide adaptation strategy. Representatives of the pilot projects usually meet annually to exchange experience between the pilot projects.

Pilot projects on the Chu-Talas, Dniester, Neman and Sava (outline of the Sava climate adaptation strategy)  are directly implemented by the Water Convention in cooperation with other organizations such as UNDP, OSCE, UNEP, and WMO.
Based on the experience of pilot projects, a Global network of basins working on climate change adaptation was created in 2013.  The creation of this Global network is one of the outcomes of the Sixth World Water Forum and it is coordinated by UNECE and the International Network of Basin Organizations (INBO). 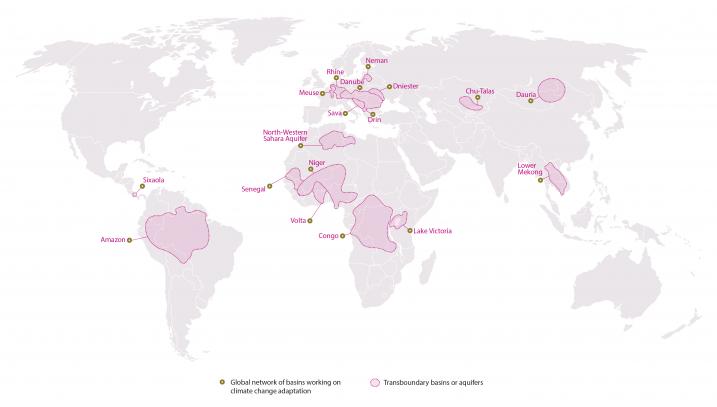 [1]The listed countries include only the members of the river basin organisations in all basins where they are established.
[2]United Nations administered territory under Security Council Resolution 1244 (1999).

The latest progress report on activities of the pilot projects and other basins in the Global network is available here. 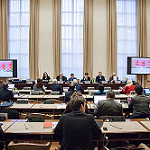 The Water Convention secretariat in cooperation with the African Water Facility (AWF/AfDB), the European Investment Bank (EIB), the International Network of Basin Organizations (INBO), the World Bank, the governments of the Netherlands and Switzerland organized training on how to prepare bankable projects for financing climate change adaptation in transboundary basins. The training was held on 21-23 June 2017 in Dakar, Senegal, hosted by the Senegal River Basin Development Authority (OMVS). Later two similar regional trainings were organised for the Lake Chad and Drin basins in cooperation with the Lake Chad Basin Commission and the Global Water Partnership Mediterranean (N'Djamena, 19 to 21 November 2018 and Tirana, 25 and 26 November 2018, respectively). As a result of the training in Dakar, a publication Financing climate change adaptation in transboundary basins: Preparing bankable projects was developed in 2019 by the World Bank in cooperation with the UNECE, INBO, the African Water Facility/African Development Bank, the Netherlands and Switzerland. This guide helps countries and river basin organisations to identify potential mechanisms and conditions of relevant donors providing funds for climate change adaptation and transboundary cooperation.

UNECE also cooperates with AGWA and the European Commission as well as UNFCCC and UNDRR to find coherence and interlinkages between global processes on water, climate change and disaster risks reduction. More information on the involvement of the Water Convention into the 26th Conference of the Parties to the United Nations Framework Convention on Climate Change is available here.

A leaflet about the Climate Change activities under the Water Convention can be found here: English, French, Russian, Spanish.