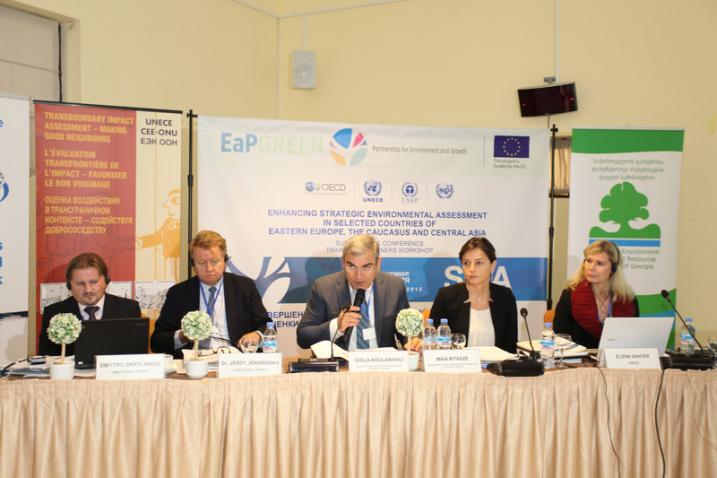 In cooperation with the United Nations Economic Commission for Europe (UNECE), Ministries responsible for environment in Armenia, Azerbaijan, Belarus, Georgia, the Russian Federation, the Republic of Moldova and Ukraine (hereinafter Ministries) are in the process of reforming their respective national environmental assessment legislation and institutional frameworks with a view to joining and implementing the UNECE Protocol on Strategic Environmental Assessment (SEA) to the Convention on Environmental Impact Assessment in a Transboundary Context (Espoo Convention). Kazakhstan plans to initiate similar reforms in 2016. The aim of the reforms is to establish and implement national SEA systems that are aligned with the provisions of the Protocol. In 2015, some of the countries have also initiated or intend to initiate pilot SEA procedures for selected national plans or programmes. These pilot procedures allow for: practical application of the draft legislation; building of national capacities on SEA; and development of recommendations for further reforms.

Despite significant efforts of the Ministries, countries still face a number of challenges that could delay the introduction of national SEA systems, lead to incorrect interpretation and to weak transposition into national level of the provisions of the Protocol on SEA, and delay their expected ratification of/accession of the countries to the Protocol. To date, Armenia is the only country in Eastern Europe, the Caucasus and Central Asia sub-region that is Party to the Protocol on SEA (since 2011). In particular, some of the reported challenges relate to difficulties in understanding and designing procedures on screening, quality control and transboundary SEA procedures; in engaging sectoral authorities that play crucial role in the SEA systems; and in creating their own pool of experienced national experts that can further support the reform processes.

To support legislative reforms of environmental assessment systems and build national capacities in implementing SEA, UNECE secretariat to the Espoo Convention and its Protocol on SEA organises a one day sub-regional conference and four day train-the-trainers workshop on SEA. Up to forty participants from Armenia, Azerbaijan, Belarus, Georgia, Kazakhstan, the Russian Federation, the Republic of Moldova and Ukraine are expected to actively take part in the events.

The events are mainly funded under the European Union (EU) funded Programme “Greening Economies in the Eastern Neighbourhooh" (EaP-GREEN). This funding is supplemented by the EU funded project ‘Supporting Kazakhstan's Transition to a Green Economy Model’ and a UNECE project in support of the development of the SEA system in the Russian Federation funded by the Swedish Government. The events are organized by the UNECE secretariat with the assistance of consultants. The logistical support, is provided by the Georgian non-governmental organization ‘Georgian Environmental Outlook’.