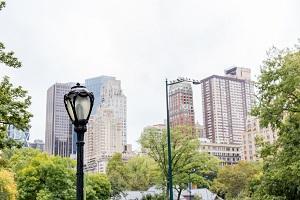 In light of unprecedented heatwaves and series of lockdowns that hit cities across Europe and North America over the last year, ensuring there are green urban spaces that could help bring down the temperature and provide safe spaces for recreation and relaxation has never been higher on policy-makers’ agendas. In March 2019, the United Nations General Assembly declared 2021 – 2030 to be the Decade on Ecosystem Restoration and called for action at all levels to protect and restore degraded ecosystems and reverse biodiversity loss.

Adding to their climate change mitigation and health benefits, urban trees and forests offer a unique opportunity for policy-makers at the local level to contribute to the Decade, prompting over 50 mayors at the inaugural Forum of Mayors in October 2020 to endorse a Declaration which places trees and forests at the heart of the urban agenda for next decade.

To support mayors in the UNECE region to put this into action, UNECE has launched a global campaign, the Trees in Cities Challenge, to promote climate action in cities through expansion of urban forests. Originally due to run until December 2020, the campaign attracted pledges from over 20 cities who committed to increase their canopy cover, improve the management of their urban forests, restore biodiversity and combat climate change.

Victoria (Canada) and Helsingborg (Sweden), some of the first cities to make a pledge to the Trees in Cities Challenge, opted for ambitious, residents-led tree-planting action, as have more recent entrants Chisinau (Moldova) and Ashgabat (Turkmenistan). While the outbreak of COVID-19 caused significant disruption to tree-planting activities, many cities, including Tbilisi (Georgia), Barcarena (Brazil) and Vancouver (USA) were able to fulfil their pledges, planting over 10,000 and 1,000 new trees each. Despite the coronavirus outbreak, cities across Israel, including Nof Hagalil, Yehud-Monosson, and Kfar Saba, made a pledge in 2020, seeking to ensure their residents can enjoy safe and wide green spaces as new lockdown measures tighten.

To further stimulate action at the local level in the Decade of Action, UNECE is extending the Trees in Cities Challenge until the end of 2022. This will allow cities which could not make a pledge due to the disruptions and financial strain caused by the pandemic to join the campaign.

UNECE Executive Secretary Olga Algayerova, who launched the Trees in Cities Challenge at the UN Secretary General’s Climate Action Summit in 2019, said: “As we enter the Decade on Ecosystem Restoration, we must remember that urbanization is one of the key causes of ecosystem degradation and biodiversity loss. The Decade will be key to reversing that relationship. Mayors – this is your chance to make history. A single concrete building may be a landmark of your city for a few decades, but a cared for and properly maintained urban forest can be one for centuries. Join our efforts to protect, maintain and restore these precious urban ecosystems”.

To find out more about the “Trees in Cities Challenge” campaign, please click here.