UN Alliance aims to put fashion on path to sustainability 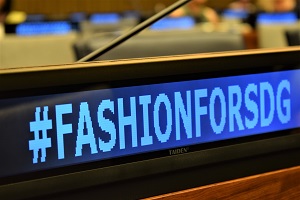 The fashion industry has seen a spectacular growth in the early 21st century. It is now valued at more than 2.5 trillion dollars and employs over 75 million people worldwide. Between 2000 and 2014, clothing production doubled with the average consumer buying 60 percent more pieces of garment compared to 15 years ago. Yet, each clothing item is now kept half as long. The industry has truly entered the era of “fast fashion”.
Despite an increase in jobs, this development comes at a price. The general current states of the fashion industry can be described as an environmental and social emergency. “The fashion industry is highly greenhouse gas intensive, with estimated emissions ranging between 2 and 8 percent of the global total.” In addition, the textiles industry has been identified in recent years as a major contributor to plastic entering the ocean, which is a growing concern because of the associated negative environmental and health implications. Fast fashion is also linked to dangerous working conditions due to unsafe processes and hazardous substances used in production. Costs reductions and time pressures are often imposed on all parts of the supply chain, leading to workers suffering from long working hours and low pay.
The UN is committed to changing the path of fashion, reducing its negative social, economic and environmental impact and turning it into a driver for the implementation of the Sustainable Development Goals (SDGs). During a side event “UN Partnership on Sustainable Fashion and the SDGs” held at the High Level Political Forum on Sustainable Development (HLPF) on 10 July 2018, in New York,  10 different UN organizations agreed to establish a UN Alliance on Sustainable Fashion.
The importance of the commitment towards improving collaboration and knowledge sharing, and strengthening synergies between existing initiatives, was highlighted by Ms. Marie Chartadová, President of the Economic and Social Council (ECOSOC), who stressed “that the fashion industry needs to change gear”.
The side event, which was hosted by the UN Economic Commission for Europe (UNECE), discussed how different UN organisations are working on sustainable fashion, and how now momentum has built to collaborate on the topic.
The Executive Secretary of UNECE, Ms. Olga Algayerova, stressed that it is now the time to “make sustainability the next fashionable trend”.
UN Environment took a bold step in agreeing to host the Alliance during its first year, and formally launch it at their next Environment Assembly in March 2019. The Alliance also aims to reach out to wider audiences, targeting the private sector, governments of UN member States, NGOs and other relevant stakeholders with a unified voice.
Mr. Robb Skinner, Executive Director of the UN Office for Partnerships (UNOP) pointed out “that all organizations working on issues related to the fashion industry will benefit from increased collaboration”. It also builds on the momentum for change called for by many leaders during the HLPF. The complexity of the fashion supply chains makes it even more apparent that working in silos will not be enough to reach the SDGs.