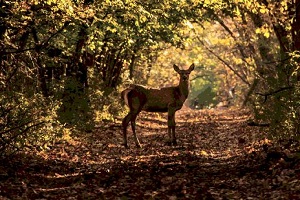 Forests host an estimated 80 percent of all terrestrial species of animals, plants and insects. The diverse species which inhabit vast forest landscapes play a key role in keeping forest ecosystems healthy and productive. Globally, biodiversity loss is taking its toll on the world’s forests: when animals and organisms disappear from forests, many of the vital functions they perform are lost, with significant implications for forest health, the climate, and livelihoods of millions of people.

The Russian Federation alone accounts for around one-fifth of the world’s forests, and animals found in and around forests in Russia are among the most precious, vulnerable species today. One such animal is the famous Siberian tiger, whose population fell as low as 40 in the 1940s. Thanks to restoration and conservation efforts, this number has risen to 540 Siberian tigers living in the wild in Russia today.

The story of the survival of the Siberian tiger is an inspiring one and can serve as a broader call for action to protect and conserve complex forest ecosystems upon which we all depend. To raise awareness of the importance of biodiversity conservation for forest ecosystems, the Russian Geographical Society, UNECE, the Food and Agriculture Organization of the United Nations and the Permanent Mission of the Russian Federation to the United Nations in Geneva organized the exhibition “Forest biodiversity: too precious to lose” from 2 – 12 November 2020 in the Passerelle of the Palais of Nations. Due to the restrictions on attendance caused by the COVID-19 outbreak, the exhibition is also available in virtual format.

During the opening, on 4 November, Mr. Alexander Alimov, Deputy Representative of the Russian Federation to UNOG and other International Organizations in Geneva, noted:

“This year we have issued a new Red List of the Russian Federation. One third of animal species included in the list are new species that are now under protection by the Government. This practice has demonstrated that well-planned conservation action leads to positive outcomes – over the recent years, we have been able to increase the numbers of the Siberian tigers, Persian, Amur and snow leopards, polar bears, European bison and falcons.”

“Saving our flora and fauna from extinction and ensuring the environmental balance require a holistic approach and harmonization of efforts on other ecological and sustainable development tracks. As a “forest power” with 20% of world’s forests, the Russian Federation attaches special significance to sustainable forest management, adaptation to adverse effects of climate change, sustainable development of its freshwater systems in accordance with the basin approach to water management, including in the transboundary context.”

Ms. Paola Deda, Director of the Forests, Land and Housing Division of UNECE, who chaired the launch of the virtual exhibition on 4 November, remarked:

“The current health crisis spirals from another major crisis of our time – a biodiversity crisis. This is why the recovery path that lies ahead of us must include enhanced efforts to meet the targets of the Sustainable Development Goal 15: Life on Land, which, as this pandemic has shown, is absolutely central to preventing such crises from happening again”.