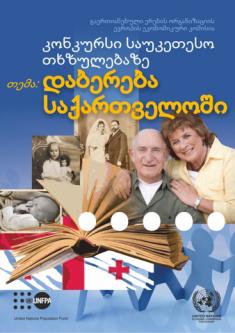 The contest was launched as a joint project of the UNECE and the United Nations Population Fund (UNFPA) at the beginning of 2014. A small committee selected ten winners who received their 50 Lari cheques at an award ceremony organized in the UN House in Tbilisi in July. Many of the older writers travelled across the country to take part in the event. They gave little speeches and read poems they had written especially for the occasion. To see the characters behind these stories, award-winning Georgian photographer Mzia Lekveishvili visited them in their living environments. Her photos show people, happy and sad, thoughtful, energetic, all of them with both feet in their lives, parts of families, communities, workplaces and civil organizations. They provide a snapshot of the realities of older people in Georgia. The pictures and stories are as diverse as Georgia itself. We hope the book will help give Georgia a face beyond its borders and help the readers and viewers appreciate its rich culture and society.The essay contest was undertaken jointly by UNECE and the United Nations Population Fund (UNFPA) with support from the Georgian Ministry of Labour, Health and Social Affairs. The project would not have been possible without the support of the ATIP Fund and Management of State Elderly houses in Tbilisi and Kutaisi, the Georgian Red Cross Society, the Koda Community Education Center, Caritas Georgia, the Older Women’s Association “Deserving Old Aged” in Kobuleti based as well as DVV International. Special thanks go to Ketevan Vachadze-Sen for translating the essays and to Nicky Chadwick for editing them.

In early 2014, any one beyond retirement age in Georgia was invited to participate in a contest submitting an essay of up to five pages about:

The designations employed and the presentation of the material in this webpage do not imply the expression of any opinion whatsoever on the part of the Secretariat of the United Nations concerning the legal status of any country, territory, city or area, or of its authorities, or concerning the delimitation of its frontiers or boundaries.
The views expressed in authored sections of this publication are those of the authors and do not necessarily reflect the views of the United Nations Economic Commission for Europe, the Georgian Government or the any Georgian authorities.

Reviewed by a jury of five, the authors of the ten best essays received a prize of 50 Lari. The winners were:Participated also in the contest :

The award ceremony was held on 16 July 2014 in the UN House in Tbilisi.

Click on this link to see the pictures.The winning essays, together with a selection of additional essays and quote, have been published as a BOOK in both original language and as an English translation. The essays are accompanied by a portrait of the author in their living environment.