Have you ever asked yourself, ‘what does a trader try to achieve when trading globally beyond making a profit?’ To put it simply, traders want to supply goods that meet their customers’ needs, including their deadlines, as quickly as possible and with minimum cost. However, supplying the goods in time with a minimum cost is not as simple as it sounds. In a global trade transaction, there are national and international regulations or formalities that must be followed. These formalities include significant paperwork and cumbersome processes, which are often referred to as, ‘red tape’. Most of these formalities are carried out behind the border (domestically) or at the border. They include, for example, customs declarations, customs clearance, trading permits, certificates of origin, quality or inspection certifications, and so on. All these formalities require significant paperwork, many days to complete (not including transportation) and they come with a lot of ‘hidden’ costs. The OECD has estimated that simplifying these formalities could save between 2 to 15 percent of the value of goods traded. 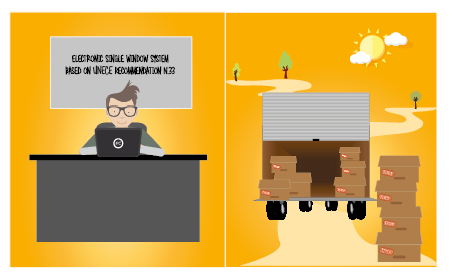 What if all these formalities could be done in a few clicks and the lengthy formalities for export and import could be abandoned? Yes, this is a reality in some countries and could be a reality everywhere due to something called an Electronic Single Window system which is based on UNECE Recommendation No. 33. Globally, more than 70 country economies are using Single Window systems, as reported by the World Bank. Through this system, when completely implemented, all the information related to an export or import can be submitted in a single entry point. This means traders no longer need to go to multiple offices, obtain various paper permits and wait uncertainly to clear their goods. All these steps can be finished, at one time, through the Single Window and within a matter of hours (or, in some cases, minutes). That is just one example of the type of “product” that UNECE offers to facilitate global trade. UNECE has been working to facilitate trade for more than four decades by bringing together a wide range of experts from countries around the globe in order to develop:

To know more about these tools and instruments and how to use them, information free of charge is available at www.tfig.unece.org.