Jobs in green and healthy transport 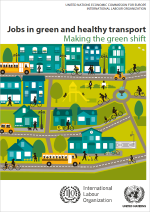 This study, commissioned by the Steering Committee of the Transport, Health and Environment PanEuropean Programme (THE PEP) through its Partnership on Jobs in Green and Healthy Transport, examines the economy-wide employment implications of an accelerated shift towards greener land transport in the region of the United Nations Economic Commission for Europe (UNECE).

The study compares a ‘business-as-usual’ approach with scenario-based projections that run up to 2030. These options envisage an accelerated expansion of public transport and the electrification of private passenger and freight transport.