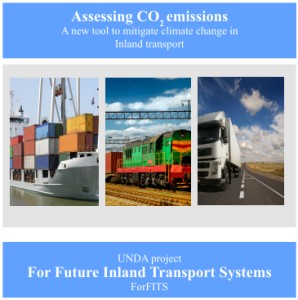 The development of ForFITS was a three-year activity started in 2011 with the goal of enhancing international cooperation and planning towards sustainable transport policies, with a particular aim of facilitating climate change mitigation. The project was funded by the UN Development Agency (UNDA) and it involved all United Nations Regional Commissions (see the flyer). The model is meant to foster sustainable transport policies For Future Inland Transport Systems (and therefore named ForFITS), and is capable of assisting users in making informed decisions about measures available for the reduction of CO2 emissions in the transport sector. Users of the tool can compare the projections between a baseline scenario and scenarios where proposed transport policies are implemented and estimate the amount of emissions that can be "saved" by their implementation in the future. Results of these analyses can be used to support the implementation of future transport policies that are likely to be effective in reducing CO2 emissions.ForFITS model ForFITS is primarily focused on CO2 emissions from inland transport, including road, rail and inland waterways, and predicts future emissions based on current patterns. CO2 emissions from aviation and maritime transport are also covered by ForFITS, but in a simplified manner in comparison to the other transport modes. The model is suitable for the analysis of transport systems having a regional, national and/or local dimension, with a primary focus on national systems. ForFITS and its user manual are freely available through the links below.

Relevant documentation, including details on the methodology behind the modelling approach; the model structure, giving information on each calculation step; the input data required, including explanations on how to use the input file; and instructions on how to perform model runs, illustrating how to visualize the results and extract them from the software application which hosts ForFITS are available in the English version of the user manual below.

For further instructions on the use of the ForFITS model and information on its characteristics, please contact UNECE directly (see the contact tab).

The pilot report builds on the application of the model to seven pilot countries: Chile, Ethiopia, France, Hungary, Montenegro, Thailand and Tunisia. The development of each pilot in terms of data gathering, definition of scenarios, model runs and analysis of the results is described in the report. The last chapter contains a set of suggestions for the definition of transport policies having implications for climate change mitigation, leveraging on the results of the pilot runs and a comparative assessment between them.  After the completion of the first phase of the project at the end of 2013, an international consultant was engaged to evaluate its post-implementation performance.  The evaluation was conducted on the basis of a desk review of all the relevant documents and more specifically an in-depth review of the development of the ForFITS model under the project. The evaluation report summarizes the findings, conclusions and recommendations of the evaluation.