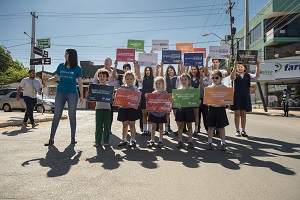 In Paraguay, road accidents are the leading cause of death in adolescents and young people aged 15 to 29 – a situation that has got worse over the last five years, according to WHO. The country also leads the list of deaths due to road accidents of motorcycle drivers and their companions in Latin America: a staggering 64% of motorcycle users who died are children and adolescents below 19, according to the Road Observatory of the National Traffic and Traffic Safety Agency (ANTVS).

Part of the problem is a lack of consideration for road safety, especially for children, in the design of urban areas. Taking action to address this situation, UNICEF and the National Traffic and Traffic Safety Agency (ANTSV) have conducted training on urban planning and sustainable transportation focusing on children, supporting architects, road engineers, urban planners and road education instructors to incorporate safety, health and children's independent mobility, as well as the right to recreation, in public spaces.

The development of the course material and the organization of the training in Paraguay, which is also being conducted in the Philippines and South Africa, is one of five pilot projects financed by the UN Road Safety Fund.

The recent four-day training session in Asunción (see video) equipped 32 people from public, private and independent professional institutions with key skills and practical knowledge to better integrate child-focused road safety in urban areas. With these new capacities, they will be expected to train university students and urban specialists, multiplying impact on the ground.

As part of the course, participants visited an unsafe crossing for schoolchildren. Valentina Galeano, a local student, is only 6 years old but is already aware of the needs of the city where she lives in terms of street safety. For her daily journey to school on foot with her mother, Valentina says that there is a lack of sidewalks, which are constantly occupied by vehicles and all kinds of commercial activities. In addition, the girl believes that, although traffic signs are present, "we must put more signs" so that people know what the rules are and respect them.

“This initiative opens a very important line of work, not only in terms of road safety, but also to think of cities from a perspective in which we consider how they should be friendly for children and adolescents, because this is also part of the development integral of children", said UNICEF representative Rafael Obregón.

As a sign of strong political commitment in the country, the opening of the course was attended by the director of the ANTSV, Carmen González de Porro, as well as the Vice Minister of Urban Planning and Habitat, Jorge Bosch; the mayors of of the cities of Asunción, Mario Ferreiro; Fernando de la Mora, Alcides Riveros; and Lambaré, Armando Gómez.

Safe roads are a fundamental component of well-functioning road safety systems. The UN Road Safety Fund takes a holistic approach to strengthening these systems, working with countries and partners to address key gaps. Building on the experience gained through its pilot projects, the Fund has launched its 2019 Call for Proposals to scale up concrete actions for road safety, prioritizing individual country and multi-country projects with immediate and tangible impact.