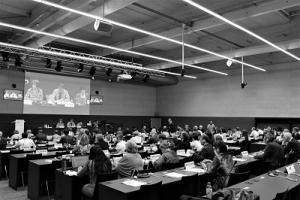 Chief Statisticians from across and beyond the UNECE region, taking part in this week’s 70th plenary session of the Conference of European Statisticians, have today adopted a Position statement on access to data held by the private sector for purposes of official statistics, publicly affirming their commitment to working closely with the private sector to facilitate the use of the best available data sources to make statistics efficiently, without prejudicing the privacy, confidentiality, reliability and accuracy that are the hallmarks of official statistics.

Our world is awash with data: data being gathered about us, data available for us to look up at the touch of a button, data that we seek and use eagerly, and data that we would prefer to keep to ourselves. With a pervasive fear that ‘Big Brother is watching us’, and the ever-growing spectre of deliberately false or misleading information, data and statistics are in the spotlight more than ever.

With the safeguards established by their ten Fundamental Principles, official statistics offer the promise of reliable, trustworthy facts in the face of questionable information from unverified sources.

But to keep on providing these trustworthy figures in our ever-changing world, producers of official statistics—the national statistical offices of each country—need raw data.

Traditionally, they have gathered such data themselves, by conducting surveys of individuals, households or business owners. These can be in-person interviews with an enumerator; mail-in paper surveys; or, increasingly, electronic forms made available online for people to fill out on their laptop, tablet or mobile phone. Moving online makes them quicker and cheaper, but even so it is increasingly challenging for statistical offices to gather all the data they need using surveys. People simply don’t want to fill them out. They take too much time, ask questions that people don’t wish to answer, or people wonder why they should provide information about themselves that has already been given to another government department, such as the health service, educational system or tax office.

At the same time, alternative possibilities for gathering the necessary data for are proliferating. So the solution might seem obvious: stop conducting surveys and use existing data sources instead.

But many of these alternative possibilities are in private hands, owned by companies that provide goods or services and collect data as part of their business. Supermarkets, public transport, social networks, online shops, credit card and banking transactions, mobile telephone systems, traffic sensors, household utility suppliers… these are just some of the most immediate examples of a list that potentially contains many thousands of possible data sources.

Official statisticians are increasingly recognizing two things about these sources: first, that privately-created and privately-owned sources represent an enormous possibility for making statistical production more efficient, less expensive and less of a burden on respondents; and second, that a large-scale shift to use of such sources must be carefully navigated and regulated. Official statistics are a public good and must always put ethics first. So obtaining data from private companies brings many concerns, ranging from the quality and long-term sustainability of the data, to the costs of obtaining it, to the social acceptability of public bodies partnering with private firms. A large share of data is currently in the hands of a small number of powerful multinationals, and official statistics must tread carefully to counterbalance this while maintaining the public’s trust in their impartiality and integrity.

The position statement adopted today both acknowledges the important potential and recognizes the need for caution in managing this transition. It commits CES members to principle-bound engagement with the private sector; and calls upon national governments and relevant ministries to support them in this endeavour, for example by fostering the necessary legislation to govern new approaches. The position statement also calls for international organizations, such as UNECE, to take the lead in strategic coordination of this shift, ensuring that countries continue working together to develop common rules and guidelines.

The Conference of European Statisticians is UNECE’s highest decision-making body, comprising the chief statisticians of all UNECE and OECD Member states as well as those of several other countries from across the globe, and the most senior statisticians of UN entities and other international organizations. This year it is holding its 70th plenary session, as well as marking 30 years since the Fundamental Principles of Official Statistics, their ‘ten commandments’, were first developed and adopted in the UNECE region.