The gender pay gap in UNECE countries: what has changed since 2000? The gender pay gap is the difference between men’s and women’s earnings from employment, shown as a percentage of men’s earnings. The gap results from many factors: horizontal and vertical gender segregation in the job market, differences in job flexibility, and, in some cases, wage discrimination. Women tend to be concentrated in certain professions and industries – such as the health and social sector – that typically pay lower wages. Women also tend to occupy fewer leadership positions and are more often employed part-time than men. These differences, in turn, can be caused by disparities in education, unpaid care commitments, and social norms.

The most commonly used indicator to measure the gap is the difference in hourly wages. This considers all wage earners, irrespective of the number of hours worked.

This gap exists in all UNECE countries, although its size varies considerably. Nonetheless, between 2000 and 2016, the gap reduced in almost the whole region. In the majority of countries, the gap has shrunk significantly, while in a few countries it has remained stable or increased only slightly. An exception to this trend is seen in Portugal, whose gap increased from 8 per cent in 2000 to more than 17 per cent in 2016. In Armenia, there has been a remarkable reduction, but the gap remains very high (33 per cent). Among European countries for which data are available, Estonia and the United Kingdom had the highest gender pay gap in 2016 and did not see any reduction during the period in question.

In some countries, where the level was fairly high in 2000, there has been a consistent decrease in differences between males’ and females’ earnings. In particular, Romania reduced its gender pay gap from more than 15 per cent in 2000 to only 5 per cent in 2016; and in Cyprus, which had one of the highest gaps (over 25 per cent) at the beginning of the period, it fell by more than 10 percentage points. In other countries, such as Italy, the gap was already small in 2000 but it has remained almost unchanged over time.

In the context of the 2030 Agenda for Sustainable Development, the gender pay gap deserves particular attention, since it not only affects gender equality (goal 5), but also inequalities in general (goal 10) and economic growth and decent work for every individual (goal 8), specifically goal 8.5: “By 2030, achieve equal pay for work of equal value”. While the data available suggest positive developments over recent years, no country has yet managed to reach equality in earnings between men and women, indicating that there is still much to do to address this issue.

The hourly gender pay gap has decreased in the majority of UNECE countries. In particular, Armenia, Cyprus and Romania have shown the greatest improvement. In European countries where the gap was the highest in 2016, however, there has been almost no reduction. 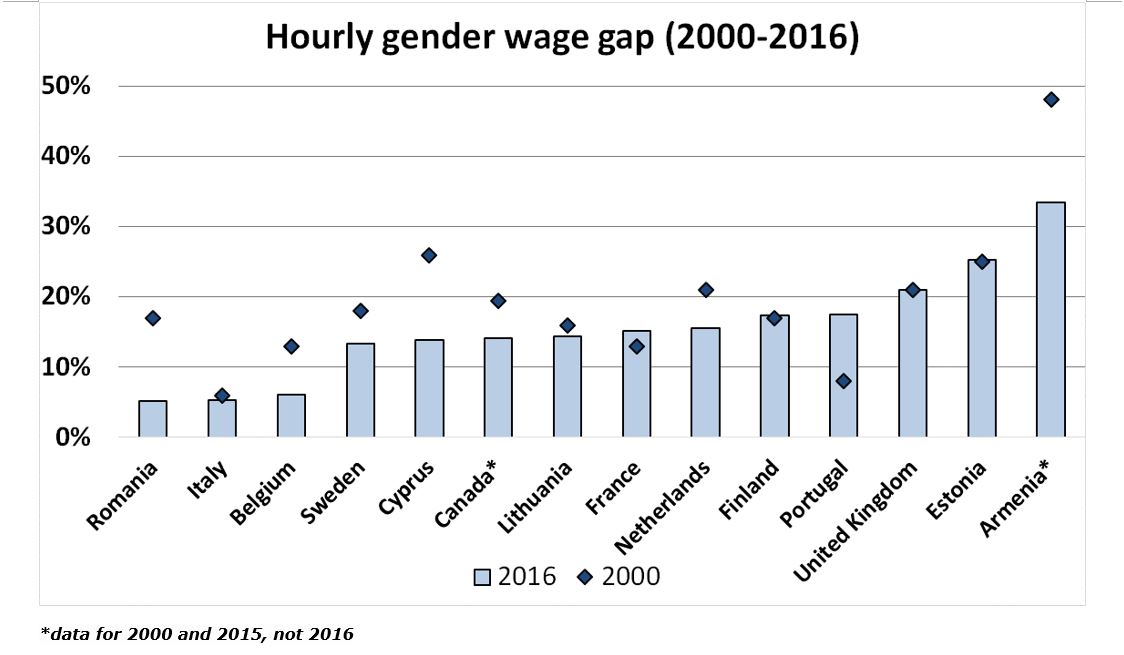 Gender Pay Gap in hourly wage rates refers to the gender gap in average hourly earnings. This indicator aims to capture the difference between men’s and women’s overall position in the labour market. It measures the difference between men’s and women’s wage rates independent of the number of hours worked, the type of activity or the type of occupation.

Find out more about the gender pay gap in the UNECE region, including the steps countries are taking to close the gap and how UNECE contributes to accelerating progress: http://www.unece.org/DAM/RCM_Website/Gender_Pay_Gap_handout.pdf