The UNECE E-Road and E-Rail censuses collect infrastructure and traffic information on the main highways and rail lines of international importance, as defined in the AGR and AGC agreements. This allows an international view on traffic levels, enabling an understanding of key international connections, potential bottlenecks and infrastructure planning.

A similar exercise is not yet done on the E-Waterways network, as defined in the AGN agreement, which spans for more than 29,200 km. In recent years, the Working Party on Inland Water Transport (SC.3) agreed that an E Waterway census could be a useful analytical tool for policymakers in member States and will give a better understanding of the international inland waterway sector, also allowing to complement information for inland transport modes.  SC.3 has requested that the Working Party on Transport Statistics (WP.6) explore this idea. Member States preferred not to consider an additional statistics collection exercise for this purpose, therefore the secretariat explored ways to produce census-like outputs for the E-Waterway network using existing data sources.

For European Union countries, Eurostat conducts data collection of many aspects of inland water transport, including regional origin-destination goods flows. These data are available in the iww_go_atygofl table which gives data for NUTS2 region origin-destination flows, on both a tonne and tonne-kilometre basis, and  breaks the data down by type of good. Data are not available for Italy, Lithuania or Sweden (nor for the United Kingdom historically), but otherwise cover all European Union states with meaningful inland water transport volumes.

To complement their extensive sub-national data collection, Eurostat publish the geospatial shapes of the NUTS2 regions. These can easily be combined with the activity  data. And from this point it is somewhat straightforward to combine the activity data with the geospatial features, and plot tonnage as straight lines between the centroids of each origin-destination.

Based on administrative boundaries: © EuroGeographics. The boundaries and names shown and the designations used on this map do not imply official endorsement or acceptance by the United Nations.

This first visualization is too noisy to provide meaningful insights. With sufficient filtering, the main routes can be ascertained, but this will still leave the challenge of understanding the magnitude of each route, as similar trajectories will overlap with each other and not give a full understanding of tonnage.

An additional geospatial data source is available from SC.3, namely the Shapefile of the E-Waterway network available from the Blue Book database. Using this Shapefile of the real shapes of canals and rivers, the Eurostat data can be manipulated and summarised so tonnage is projected onto likely routes that the traffic will pass on.

The following is a simplification of the process to visualise the inland water traffic on the real network.

There are many caveats to consider with visualizing these data using this approach, as the output will not necessarily agree with reality. Some are listed below, but there may be others to .

Given these possible reasons for differences with reality, national sources were sought to make comparisons. There are only limited national sources that publish traffic data on specific parts of the network (that the secretariat is aware of). Two such sources are the French Voies Navigables de France and the German Statistical Office Destatis. Data for regions within France are available (for example). While Destatis publish a table with flows on named parts of their network (see table 46321-0013 here).

The secretariat has conducted limited order-of-magnitude checks with these sources. There are significant differences in the French data in the Nord-Pas de Calais region, with the produced map only showing volumes between Cuinchy, Lille and the Belgian border at Deûlemont, while the map from VNF shows significant quantities also to the sea at Dunkerque. This is likely due to the data quality issues listed above (although the quantities shipped in Lille appear to be similar to the national statistics, with quantities from the national source of around 5204kt at Lille compared to 5808 kt on the map.) Source: https://www.vnf.fr/vnf/brochure-et-lettress/observatoire-transport-fluv…. The boundaries and names shown and the designations used on this map do not imply official endorsement or acceptance by the United Nations.

For Germany, the complexity of the canal network in the North of the country also lead to larger differences between the sources; for example, on the Elbe Seitenkanal, Destatis reports 6357kt and the map shows 4082kt. Meanwhile, quantities on the start of the Rhine river close to Strasbourg show a much closer alignment, with just a 4% difference between the two sources between Strasbourg and Karlsruhe. 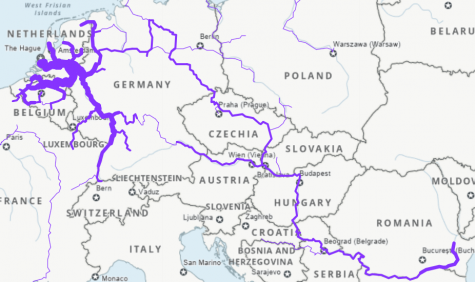 Please browse the map of 2020 inland water freight volumes at : https://gis.unece.org/portal/apps/webappviewer/index.html?id=56e9186ac6e8400f8e3177957a72b9ab. The boundaries and names shown and the designations used on this map do not imply official endorsement or acceptance by the United Nations.

The secretariat hopes that the visualization can be useful in a number of ways.

Further work in this field is possible, depending on the needs of member States. For example, trends over time or analysis by type of good can be produced. The data can of course be updated on an annual basis as well.

For an understanding of how to conduct similar geospatial analyses using an existing Shapefile, see https://r-spatial.org/r/2019/09/26/spatial-networks.html. The code for the process as done by the secretariat is available on request from [email protected].