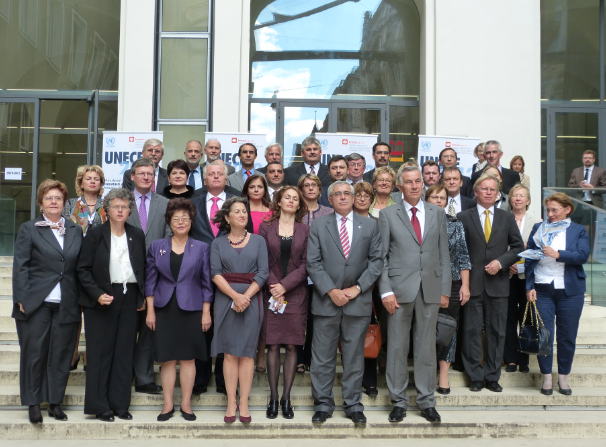 The UNECE Ministerial Conference on Ageing held on 18-20 September 2012 in Vienna, Austria, concluded with the adoption of the Ministerial Declaration “Ensuring a society for all ages: promoting quality of life and active ageing”. The Declaration outlines priority directions for the third cycle (2012-2017) of implementation of the Madrid International Plan of Action (MIPAA) in the UNECE region which begins as the Conference ends.

The Conference gathered over 500 participants, including Ministers and high-level officials, NGO representatives and scientists.

Looking at the challenges ahead, ministers and country delegations declared their determination to reach four priority policy goals by 2017, namely:

To reach these policy goals member States have stressed the importance of promoting active ageing in the national policy process. Defined as ‘the process of optimizing opportunities for health, participation and security in order to enhance quality of life as people age’ (WHO 2002), the active ageing framework is based on a life course approach, meaning that people need to live actively and healthily throughout their lives. Societies have the responsibility to adopt policy-frameworks that will allow them to do so.

Ministers and country delegations recognized this responsibility and “committed to meet individual and societal challenges triggered by population ageing through adequate and sustainable measures of financial security in old age, life-long continuum of health and social care, including long-term care, and provisions of inclusive systems and support for active ageing, life-long learning, and participation in various spheres of society without discrimination, particularly with regards to older women.”

They acknowledged “the significant progress made by many Member States” over the last five years in fulfilling the ten commitments adopted in the UNECE region in 2002. However, they “noted with concern that age discrimination continues to be a barrier, in attaining a full, healthy life as active members of society”. They therefore noted the need to “raise awareness in societies of the overall advantages of promoting active ageing for today and the future, underlining the need of allocating sufficient resources for its implementation.”

The contribution of both research and civil society to a better understanding of the multi-faceted trends of ageing and the needs of ageing populations was stressed throughout the Conference. The Declaration emphasizes that “research is vital to the development and implementation of effective policies and programmes. Sustainable research infrastructures, improved data collection, longitudinal research and cross-sectoral collaboration are to be further strengthened”.

In line with this call, scientists decided to form a Research Application and Dissemination Platform on Ageing (REAP-AGE).

The Ministerial Declaration also acknowledges the contribution of civil society and older people themselves in taking forward the provisions of MIPAA and the Regional Implementation Strategy (RIS). In a separate Declaration by the NGO Forum taking place in parallel to the Research Forum, participants requested UNECE member States to recognize fully the role of NGOs in achieving the commitments of the Conference.

Heinz Fischer, Federal President of the Republic of Austria, addressed the Ministerial segment of the Conference on 20 September. In his address, he emphasized that ageing is an “important challenge to health systems” and societies in general, and called for ambitious policy initiatives to ensure the implementation of the Madrid International Plan of Action on Ageing.

Rudolf Hundstorfer, Federal Minister of Labour, Social Affairs and Consumer Protection, Austria, emphasized that, as this Conference demonstrates, our societies should fully acknowledge that longer life-expectancy offers great social opportunities. “Ageing can no longer be seen solely through the angle of retirement and pension issues”, he said. “Designing ageing policies means that we have to make active provisions for the future, in the interest of all generations.”

In his remarks throughout the Conference, UNECE Executive Secretary Sven Alkalaj stressed the historic responsibility of member States in reshaping societies in response to population ageing. “Doing our utmost to implement the commitments of the Declaration”, he said “is in our own good interest and in that of our children”.

Activities to implement the Declaration during the third cycle of implementation of the Madrid framework will be facilitated by UNECE, which will regularly assess progress in the annual meetings of its Working Group on Ageing.

More information on the UNECE Ministerial Conference is available at: http://www.unece.org/pau/ageing/ministerial_conference_2012.html

The Madrid Plan of Action on Ageing (MIPAA) was adopted in 2002 at the Second World Assembly on Ageing. UNECE member States went one step further and devised a Regional Implementation Strategy (RIS) for the Madrid Plan. Following a first review in 2007, this is the second time that implementation of the 2002 MIPAA/RIS framework is evaluated in the UNECE region. Member States were required to submit comprehensive progress reports for the preparations of the UNECE Ministerial Conference Ensuring a society for all ages: promoting quality of life and active ageing (18-20 September 2012).