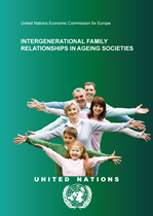 The UNECE Working Group on Ageing, at its second meeting in 2009, held an in-depth discussion on the topic of intergenerational family relationships in ageing societies.  An invited expert led the discussion and, drawing on analysis of data from the Generations and Gender Programme, produced a report which reviews the current situation and considers the policy implications of the findings.Intergenerational family relationships in ageing societies, 2010 (January 2010) One of the principal aims of the GGP is to facilitate the production of policy-relevant research.  In 2008, an international conference in Geneva brought together policymakers and researchers to discuss how GGP data could be used to aid evidence-based policymaking.  The conference proceedings are available for free download or for purchase.How Generations and Gender shape demographic change : towards policies based on better knowledge (May 2009) The aims and objectives of the GGP and a description of its origins can be found in this brochure, part of the UNECE series entitled ‘What UNECE does for you’.

What UNECE does for you - ... UNECE works on Generations and Gender Programme (January 2008) In its fourth meeting in November 2011, the Working Group on Ageing held another in-depth discussion.  The theme was ‘quality of life and active ageing’.  This led to another GGP-based policy publication using data from the surveys and contextual database.