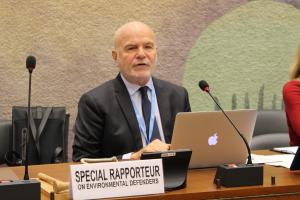 “The individuals, groups, communities, movements, and organisations that are standing up for the enjoyment of the right to a clean, healthy and sustainable environment as recognized by the UN General Assembly need to be better protected and supported. I am deeply convinced that the Rapid Response Mechanism established under the Aarhus Convention has a key role to play in that regard,” he added.

Recalling the Special Rapporteur’s role as the first international mechanism specifically safeguarding environmental defenders to be established within a legally binding framework under the UN system or other intergovernmental structure, UNECE Executive Secretary Olga Algayerova stated “It is a great honour for UNECE to service the Aarhus Convention and now also to support the mandate of the Special Rapporteur on Environmental Defenders, which is of such importance when those who strive to protect our environment are increasingly at risk.  It goes without saying that the success and effectiveness of this mechanism cannot be ensured without the commitment of Parties to the Aarhus Convention to cooperate with the Special Rapporteur.”

A mandate for action

Outlining the means through which he would deliver on his mandate, Mr. Forst explained the simple and accessible way to submit complaints to him (which can be submitted directly online); his power to issue protection measures including relocation when necessary; his use of diplomatic channels and ensuring a thorough follow-up of actions taken; raising public awareness through public statements and press releases; ensuring strengthened cooperation with other regional and international human rights mechanisms; attending trials of environmental defenders in courts as an observer; and orienting environmental defenders towards further resources to support their ongoing protection.

“Climate change, pollution and biodiversity loss cannot be addressed without guaranteeing that those who stand up against this triple environmental emergency can safely exercise their fundamental freedoms of expression, association and assembly to do so”, stressed the Special Rapporteur. At COP27, the UN Secretary General stressed the urgent need to guarantee a safe space for environmental defenders in society.

Ensuring the full implementation of the Aarhus Convention is the best way to protect environmental defenders, emphasized Mr. Forst, who will also work closely with the Convention’s Compliance Committee to achieve this.

As a first priority, the Special Rapporteur will conduct subregional consultations with environmental defenders across Convention Parties to ensure that their voices contribute to shaping implementation of this mandate. Another priority is to raise awareness among the widest possible audience of the Special Rapporteur’s role, to enable and encourage requests for the protection of any person who may be in need.

Making use of the mandate’s full potential

Environmental defenders comprise individuals, groups, movements, communities and organisations who may not see themselves as defenders, but who make use of their fundamental rights of freedom of expression, of association, and of assembly, to defend the environment. They can be small-scale farmers opposing the privatisation of a waterway or a well-structured organisation fighting against illegal logging; they can be professional environmental lawyers or journalists, or young activists marching in the streets to demand climate justice; they can be grassroots movements denouncing harmful waste management or members of national human rights institutions investigating the impact of large residential development projects on the right to housing.

Given the growing mobilisation of youth in environmental matters across Parties to the Aarhus Convention, particular attention will be paid to informing and supporting the protection of young activists.

Importantly, the Special Rapporteur can also consider complaints concerning the alleged penalisation, persecution and harassment of environmental defenders in countries that are not currently Party to the Aarhus Convention, including in Africa, Asia and the Americas if the acts complained of are related to the operations of international companies based in a Party to the Aarhus Convention. He highlighted the future EU directive on corporate sustainability due diligence as an asset for the mandate in this regard.

Securing a safe and enabling environment for defenders

The Special Rapporteur will also focus on the protection of civic space and fundamental freedoms, restrictions on which are one of the main tools to penalise, persecute and harass environmental defenders, including journalists, within Aarhus Convention Parties. A recent report of the Commissioner for Human Rights of the Council of Europe found that in many Council of Europe Member States, most of which are Parties to the Aarhus Convention, environmental-related protest movements are subjected to “constant and disproportionate criminalisation”. Severe restrictions on the basic rights to freedoms of expression, association and assembly of environmental defenders have become frequent, especially through abusive restrictions on the right to peaceful protest by imposing bans on demonstrations or issuing preventive house arrests to protesters.

Another key component of the Special Rapporteur’s work will be addressing the growing trend of using Strategic Lawsuits Against Public Participation (SLAPPs) against environmental defenders. The abusive use of such legal proceedings, and even the threat of bringing such proceedings, is on the rise in many countries as a means to silent environmental defenders and is a major barrier in securing an enabling environment.

Environmental defenders are increasingly under pressure, not least for proposing alternative economic and development models that challenge powerful interests, Mr. Forst warned. Many new forms of mobilisation for the environment are emerging, in particular among young climate activists and movements, some of which have caught the attention of the general public. “While one may disagree with these modes of action – such as road blockades, the interruption of sporting events, or the targeting of paintings – civil disobedience remains an essential component of democratic life and should not be criminalised. Discourses that associate public participation and civil disobedience with grave and illegal actions, such as terrorism, do not only represent a threat to the safety of environmental defenders, but also to our democratic values.”

Ensuring that the mandate receives adequate financial support is a responsibility that lies first with the Parties to the Convention, he further stressed. While thanking Austria and Ireland for funding and leadership, and Norway and Germany for the recent funding commitments, and noting France’s confirmation at the meeting that it would do likewise, the Special Rapporteur highlighted the urgent need for other Parties to make concrete commitments to fund the mechanism.

His full statement is available at https://unece.org/sites/default/files/2022-11/Vision_for_mandate.pdf

For more information on the mandate and activities of the Special Rapporteur or to submit a complaint, visit https://unece.org/env/pp/aarhus-convention/special-rapporteur