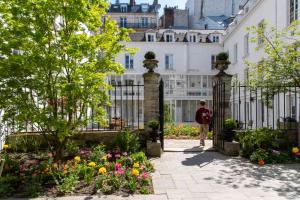 The United Nations Economic Commission for Europe (UNECE) and Columbia Global Centers | Paris (CGC|Paris), one of the ten global centres of Columbia University in New York City, signed a Memorandum of Understanding recognizing the City Diplomacy Lab at CGC|Paris as a UNECE Centre of Excellence in France.

The cooperation between UNECE and the City Diplomacy Lab will contribute to the development and implementation of collaborative activities and projects to promote the principles of the Geneva UN Charter on Sustainable Housing. As a Centre of Excellence, the City Diplomacy Lab will provide municipalities in the UNECE region and worldwide with best practices, research, support and training in the areas of city diplomacy and smart sustainable urban development.

UNECE Executive Secretary, Olga Algayerova, emphasised: “This is an additional step towards inclusive city diplomacy and multilateralism. We at UNECE are glad to join forces with the City Diplomacy Lab to further reinforce our engagement with cities and look forward to cooperating on critical urban development challenges in the region”.

“We are delighted and honoured to have the City Diplomacy Lab recognized by the United Nations as a Centre of Excellence”, said CGC | Paris Director Brunhilde Biebuyck. “With multiple crises affecting urban communities worldwide, city-to-city collaboration is more critical than ever”. City Diplomacy Lab Director Lorenzo Kihlgren Grandi said: “The recognition of City Diplomacy Lab as a Centre of Excellence will help us scale up our efforts in empowering cities to address issues including climate change, rising inequalities, migration, and food insecurity. Today's challenges are global in nature and primarily urban in impact.”

UNECE and the City Diplomacy Lab will cooperate to support the implementation of Sustainable Development Goals (SDGs), especially SDG 11: to make cities and human settlements inclusive, safe, resilient, and sustainable. The partnership aims to strengthen the capacity of cities to actively contribute to the “more inclusive multilateralism” called for by the Secretary-General of the United Nations, António Guterres, which the UNECE Forum of Mayors is putting into action.

Specific activities that will be undertaken by the City Diplomacy Lab will include training curriculum development; capacity-building and publications on city diplomacy and smart sustainable urban strategies; and the organization and hosting of meetings to disseminate information about UNECE and the Geneva UN Charter at international, national, and subnational levels.

To facilitate the work of the City Diplomacy Lab as a Centre of Excellence, UNECE will encourage the exchange of information, knowledge, and experience within the network, as well as with relevant international and national organizations in the UNECE region and facilitate cooperation and exchange between the Centres of Excellence.

The major aim of UNECE is to promote pan-European economic integration. UNECE includes fifty-six member States in Europe, North America, and Asia. However, all interested United Nations member States may participate in the work of UNECE. Over seventy international professional organizations and other non-governmental organizations take part in UNECE activities.

For further information on the work of the Committee on Urban Development, Housing and Land Management, please consult http://unece.org/housing/committee.

Columbia Global Centers | Paris is part of a network of ten global centres of Columbia University in New York City, one of the world's leading academic institutions. The centres serve as knowledge hubs that aim to educate and inspire through research, dialogue, and action.

Located at historic Reid Hall, which was gifted to Columbia University in 1964, CGC | Paris partners with regional and international institutions to engage students, faculty, alumni and the public across borders and disciplines.

Launched in September 2021, the City Diplomacy Lab is a special project of CGC | Paris that fosters the design and implementation of effective local solutions to the world’s multiple crises. The Lab strives to enhance the understanding and practice of city diplomacy, which forges international collaborations between cities to promote sustainable development and peace, while jointly addressing challenges such as climate change, rising inequalities, and migration.

The Lab’s action, which includes applied research, capacity-building and public programming, is implemented through numerous collaborations with municipalities worldwide, city networks, universities and international organizations. The Lab also benefits from the resources of the Columbia Global Centers network.