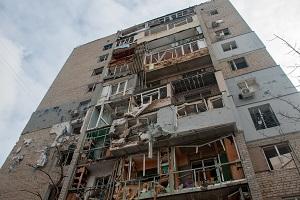 The war has already caused the destruction of infrastructure in many urban areas of Ukraine and will require enormous efforts by the government and international partners to reconstruct following the cessation of hostilities.

In April 2022, the Ministry for Communities and Territories Development developed draft recommendations for plans for rebuilding cities and human settlements, which are expected to be applied by local governments as part of the reconstruction efforts.

Building on longstanding cooperation, the Ministry requested UNECE support for the further development of the Recommendations. In response, UNECE established the UN4Kharkiv Task Force which now comprises more than ten UN agencies who work together to support efforts of the government in developing innovative approaches to rebuilding cities in Ukraine. The Task Force includes representatives of the UN Resident Coordinator office in Ukraine, UNOPS, UNDP Ukraine, UNEP, UNDRR, WHO, IOM, OCHA, OHCHR, UN-Habitat and UNICEF Ukraine. UNECE coordinates activities of the Task Force.

As part of the cooperation, the Ministry initiated a first pilot project on the development of a reconstruction plan for the city of Kharkiv, the second largest city in Ukraine, which is expected to become a blueprint for the reconstruction of other Ukrainian cities.

The Mayor of Kharkiv Ihor Terekhov met at the Second UNECE Forum of Mayors on 5 April 2022 with Architect Lord Norman Foster who supports the organization of the Forums of Mayors and acts as its informal patron.  At the Forum of Mayors, Mr. Terekhov outlined his vision for rebuilding of the city and invited Norman Foster to develop the new city master plan.

Lord Foster accepted the invitation and has released a manifesto to rebuild the city of Kharkiv where he pledged "to assemble the best minds with the best planning, architectural, design and engineering skills", bringing together top Ukrainian talents with worldwide expertise and advice. According to the manifesto, “the first step would be a city masterplan linked to the region, with the ambition to combine the most loved and revered heritage from the past with the most desirable and greenest elements of infrastructure and buildings – in other words to deliver the city of the future now and to plan for its life decades ahead. A masterplan is an act of confidence in the future for generations still to come.”

The Mayor of Kharkiv Ihor Terekhov outlined his vision for the new master plan: “In the new and peaceful Kharkiv, we would like to pay great attention to developing the IT sector, high-tech industrial parks and industry. It is an opportunity to reconstruct large production facilities and breathe into them a second life. In terms of architecture, comfort and security, the city of Kharkiv should achieve a completely different level. Our plans are to build a state-of-the-art city centre, to diversify our neighbourhoods so that they would differ from each other. We will also build bomb shelters, dual-use underground parking lots, multi-level road junctions, bike paths, new recreation areas, parks and squares”.

Work on the Master Plan started on 12 April 2022 with the first coordination meeting of the UN4Kharkiv Task Force. The work on collection of data and information for the Kharkiv Master Plan is ongoing. Weekly coordination meetings between the city administration of Kharkiv, the Norman Foster Foundation, involved international and national experts are organized by UNECE.  Four working groups were established on: (1) Development of the master plan; (2) Public consultation on “Kharkiv before the war and after”; (3) Master plan design and architecture bringing together both international and local architects and architecture experts; (4) Assessment of destructions in the city.

In parallel to the development of the Master Plan, the UN4Kharkiv Task Force is working on redesigning the national draft recommendations for plans for rebuilding cities and human settlements and mapping capacities of UN agencies and of available approaches and instruments to support the government’s efforts to rebuild Ukrainian cities and regions. The Presentation of the first outcomes of the UN4Kharkiv Task Force is expected to take place on 24 May 2022.

“Negotiations must bring an end to this senseless war now so that urgently needed sustainable developments efforts may resume. Amid the ongoing destruction and suffering in Ukraine, we must also keep hope and look to the future. This is why UNECE is fully committed to working with the Government of Ukraine and the city of Kharkiv to plan ahead for sustainable reconstruction efforts, connecting the expertise and vision of our partners in the UN system and Lord Foster”, stated UNECE Executive Secretary Olga Algayerova.

UNECE has a longstanding partnership with the Ministry for Communities and Territories Development of Ukraine, dating back to 2011-2012, with the launch of the Country Profile on Housing and Land Management. The latest project was the preparation of an economic and financial recovery and rebuilding plan after the COVID-19 pandemic for the city of Kharkiv.