Pan-European countries reaffirm commitment to advance the water, sanitation and ‎health agenda at Meeting of the Parties to the Protocol on Water and Health 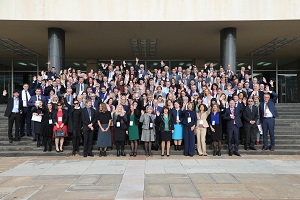 Montenegro is to become the 27th Party to the Protocol on Water and Health in the next months and 8 other pan-European countries confirmed that they are on their way to accession!

These announcements came as more than 225 participants from  40 countries gathered in Belgrade for the 5th session of the Meeting of the Parties to the Protocol on Water and Health (MOP5), a key intergovernmental meeting on water, sanitation and health in the pan-European region, held from 19 to 21 November in the Palace of Serbia.

While water, sanitation and health are at the core of the 2030 Agenda for Sustainable Development and are key to successfully achieve its aspirations; in the pan-European region, 140 million people still lack access to clean water and 36 million lack access to basic sanitation services. To address these challenges, the Protocol on Water and Health has, since its adoption in 1999, supported remarkable progress in water, sanitation, hygiene and health in the pan-European region, particularly in providing access to basic drinking-water and sanitation services, improving drinking-water quality and reducing the occurrence of water-related disease incidents and outbreaks. Between 2010 and 2015, over 19 million people gained access to a basic drinking water source following the entry into force of the Protocol.

MOP5, which was co-organized by UNECE and the WHO Regional Office for Europe (jointly servicing the Protocol on Water and Health) and hosted by the Government of Serbia, discussed and reviewed achievements, challenges and areas for action in the implementation of the Protocol.

Ms. Olga Algayerova, UNECE Executive Secretary, underlined the pioneering aspects of the Protocol which “brings together two communities: water and environment, and health” and is “designed with an eye towards integrated water resources management and intersectoral cooperation to ensure access to safe drinking water and the provision of sanitation for everyone”.

In his message to the meeting, UN Secretary-General António Guterres emphasized the clear catalyst role of the Protocol in implementing Sustainable Development Goals 3 (on good health and well-being) and 6 (on clean water and sanitation), urging all countries to ratify the Protocol and strive for its full implementation- as we enter the decade of action to deliver the SDGs. Indeed, the Protocol has proven to be a key mechanism to implement SDGs, in particular through the setting and implementation of tailored national targets.

The relevance of the Protocol in achieving SDGs was also at the centre of the high-level session discussions which welcomed high-level representatives from the region including the Prime Minister of Serbia, the Serbian Ministers of Environmental Protection and Health, Ministers of Health from Montenegro and Hungary; and a number of Deputy Ministers (Belarus, Tajikistan, etc). The speakers highlighted how the Protocol has stimulated and guided remarkable improvements in water, sanitation and health in their countries benefitting the entire region.

The sound, forward-looking framework and multilateral platform offered by the Protocol was highlighted by WHO Regional Director for Europe, Ms. Piroska Östlin, who referred to the Protocol as “an instrument bringing together actors from multiple disciplines, to care for and protect all of us in our region by ensuring adequate, accessible and safe water, sanitation and hygiene”.

The High-level session also recognized the growing convergence between the Protocol and relevant EU law such as the EU Drinking Water Directive; and the need for strengthened cross-sectoral partnerships to address emerging issues such as antimicrobial resistance and legionella.

MOP5 reviewed achievements made by countries in the areas of prevention and reduction of water-related diseases; water sanitation and hygiene in schools and health care facilities; small scale water supplies and sanitation; equitable access to water and sanitation.

The above progress but also the related challenges were illustrated in the regional report on the status of implementation of the Protocol based on the 33 national summary reports submitted by pan-European countries (26 Parties and 7 non-Parties) under the 4th reporting cycle under the Protocol on Water and Health.

The data gathered under this reporting cycle provided a key insight into the water, sanitation and environmental health situation in the pan-European region enabling to draw common trends showing progress and remaining challenges. Among key trends: most countries set targets on equitable access to water and sanitation and on water and sanitation safety; rural areas continue to have water of a lower quality compared to urban ones and access to drinking water in rural areas lag behind (in some countries it is below 50%). The report also highlighted emerging priorities such as climate change adaptation. Finally, financing challenges seem to be of common concerns for many countries.

To respond to some of these challenges, the meeting adopted the new Programme of work for 2020-2022 in continuity with previous activities. The meeting also launched several new publications including a Practical Guide for Joint Implementation of the Protocol and the Agenda 2030; an analysis of findings and lessons learned from the work on equitable access to water and sanitation under the Protocol demonstrating how to put the human rights the safe drinking water and sanitation into practice; and other publications on how to strengthen drinking-water surveillance with risk-based approaches and how to improve water, sanitation and hygiene standards in schools.

Throughout the meeting, participants also heard voices collected from all over the pan-European region  on what water and sanitation means to citizens, exploring issues such as water quality, efficient sanitation or equity.

For the first time, a round-table discussion on financing was organized with Parties to the Protocol and other partners to discuss how to strengthen sustainability and predictability of financing by engaging them to contribute financially and in-kind to the implementation of the new programme. A number of Parties made pledges reaffirmed their commitment to support the Protocol’s activities.

Finally, Belarus was elected to chair the Meeting of the Parties in the next triennium, succeeding Serbia. The Protocol’s Compliance Committee also elected 4 new members, including Ms. Catarina de Albuquerque, former UN Special Rapporteur on the human rights to safe drinking water and sanitation.