The Sustainable Development Goals (SDGs), officially known as transforming our world: the 2030 Agenda for Sustainable Development, are an intergovernmental set of aspiration Goals with 169 targets. The Goals are contained in paragraph 54 United Nations Resolution A/RES/70/1 of 25 September 2015. The Resolution is a broader intergovernmental agreement that, while acting as the Post 2015 Development Agenda (successor to the Millennium Development Goals), builds on the Principles agreed upon under Resolution A/RES/66/288, popularly known as "The future we want". A key focus of these goals is to improve access to essential public services. However, as the financing required to do so cannot be fully met through public funds and donors, new financing arrangements such as Public-Private Partnerships (PPPs) will need to be utilized.

But what are the most appropriate PPP models and procedures that can contribute to achieving the SDGs across a wide spectrum of different sectors like water and sanitation, health and renewable energy and how can these models be developed in a time scale that will be consistent with the achievements of these new targets?

At the 6th session of the UNECE Team of Specialist on Public-Private Partnerships held in Geneva in June 2014, agreement was reached both to develop international PPP standards and on an innovative structure for producing them. The new UNECE International PPP Centre of Excellence (ICoE) will become a project-driven, goal-oriented body that produces standards both relevant and effective in the evolving PPP landscape.

The ICoE will also work in close collaboration with other international organizations including the World Bank and the World Economic Forum to develop standards that will enable the realization of the SDGs.

The ICoE will leverage on modern technology to ensure that the standards are developed in an inclusive yet efficient manner. In particular, a knowledge-sharing platform called the PPP Projects website has been constructed to facilitate open access to each stage of the standards development process and mobilization of PPP experts. Through its “public review” function, the platform will enable key stakeholders such as NGOs and the public to convene and offer feedback on on-going projects.

Pictured below is a screenshot taken from the knowledge platform. It identifies existing projects as well as their progress along the seven-stage standards development process. The knowledge platform and more details about projects including scope, members and pertinent documents can be found here. 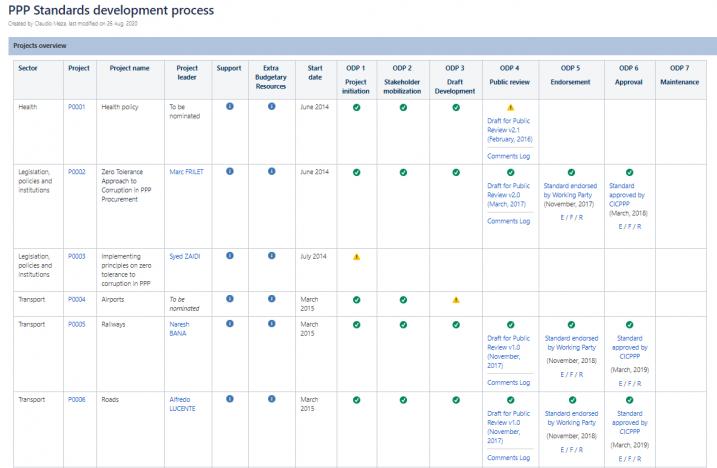 The ICoE requires the active participation of PPP experts to achieve its objective of producing global standards in PPPs: - These experts are individuals who possess transaction experience in the field of PPPs, knowledge of project financing and understanding of long-term legal contracts. - All PPP experts based in the ICoE contribute their time and knowledge on a purely voluntary basis. While they will receive no financial compensation, they can expect their work to be recognized as an important cornerstone in the development of international standards in PPP. - The PPP Projects website will regularly showcase “Calls for Participation”, which are information notes listing details about upcoming projects and the particulars of the focal point for each project. Interested parties are welcome to liaise with the focal point for more information.

Areas where PPP standards are being produced: