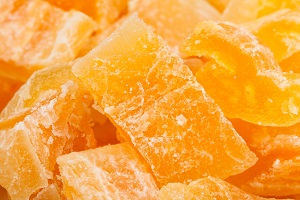 More than 9 million tonnes of melons of various types are produced worldwide every year. Most melons are consumed fresh, leading to an abundance of available produce in many regions of the world including in Central Asia. Compared to the overall production, export volumes in Central Asia are low. In Uzbekistan, for example, only about 27 thousand tonnes of the 1 million tonnes produced per year are exported. This has led to an increased drive for the production of dried melon, a quest for improved quality and export readiness.

Currently also exported at very low volume, dried melon, though a traditional product in Central Asia, is mostly absent from the major international dried fruit markets. The fresh melons are sun dried by local farmers following traditional methods. Recently, investment into modern drying equipment in factories has led to increased volume and reduced turnaround time and created employment opportunities, particularly for women. Dried melons preserve most of their valuable nutrients and vitamins including A, P, C after drying which are at the core of their said natural healing power and energy.

While not all kinds of melons are suitable for drying, leveraging part of the fresh production to add value makes dried melons an attractive new export item for the most important producing country, Uzbekistan, as well as the other countries of Central Asia. With the aim of advancing this international trade, opening new export markets and generating income for producer communities—many of which are women involved in production, post-harvest processing and grading— UNECE has adopted a quality standard for this product.

This is the first-ever international quality standard elaborated by a Central Asian country, Uzbekistan, with the support of the Central Asia Working Group on Quality Standards. This public-private expert group with technical working groups in Kazakhstan, Kyrgyzstan, Tajikistan, and Uzbekistan, is supported by the United Nations Development Programme (UNDP), UNECE, Hilfswerk Austria International and the German development agency GIZ. This unique regional cooperation among the four countries, international organizations and donor agencies, on UNECE standards will lead to the development of relevant training material to prepare the full launch and use of this standard– from farm to export and local markets.

Improving the quality of the dried melons in Uzbekistan and the other producing countries will help introduce this produce in export markets and to consumers worldwide. It will provide opportunities to local producing communities and traders to generate income and formal employment, boosting progress on Sustainable Development Goals.

The full standard for dried melon is available at: http://www.unece.org/trade/agr/standard/dry/ddp-standards.html