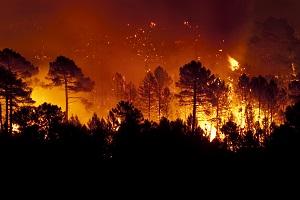 August is wildfire season in many parts of the Northern Hemisphere. Many areas in the UNECE region, including North America, Siberia, and Mediterranean countries have experienced unusually hot and dry weather this year, and with that some of the biggest wildfires on record. Areas burned in Turkey and Greece were approximately 8 and 12 times larger than average, respectively. Clouds of toxic smoke from the boreal forested Sakha Republic in Siberia (Russian Federation), have drifted as far as the North Pole.

The negative social, ecological and economic impacts of wildfires on landscapes continue to escalate. Globally, wildfire smoke is estimated to cause over 339,000 premature deaths a year – far more than those who lose their lives directly in these blazes. In British Columbia (Canada), emissions from wildfires in 2017 and 2018 were more than three times those of all sectors in the province combined.

While wildfires are a natural part of many environments and crucial to clear out dead undergrowth, restore nutrients and regenerate soils, scientists have warned that due to climate warming wildfires will increase in severity and scale and extend well beyond the usual fire season. Larger wildfires in turn could exacerbate climate change by releasing enormous quantities of greenhouse gases. This could accelerate the thawing of methane-laden permafrost soils, thereby significantly impacting the ecosystem’s long-term ability to regenerate.

With the recently released IPCC report’s dire predictions of increased temperatures and extreme weather events, we must make the link between wildfire emission increases and the goals to achieve net-zero and net-negative emissions to mitigate further climate change. As scientists noted at the recent UNECE/FAO discussion on the science and policy of wildfires in the boreal biome: if we are to achieve the goals set out in the Paris Agreement, we need to sufficiently take into account wildfire risk when managing existing forests and planning large-scale tree planting activities. We also need to look beyond just tree planting to sufficiently address the importance of rewetting and restoring peatlands and wetlands – both crucial components for reducing wildfire risk. In addition, it is often those communities that are directly impacted by wildfires that suffer from a lack of financial means to put in place preventative measures. Financial and technical support, e.g. to thin forests surrounding settlements, encourage the construction of fire-proof homes, and develop evacuation plans, could enable these communities to become more fire resilient. Lastly, fire-smart forestry should be implemented to decrease the risks of wildfires spreading to communities.

The threats facing forests that are of global scope can only be solved through international cooperation. No matter the country, climate change affects forests’ capacity to withstand multiple disturbances like wildfires, and outbreaks of pests and diseases. A healthy forest holds significant potential for mitigating climate change and its effects. Forests are not only vital for stabilizing the global climate and providing long-lived wood products. They also provide livelihoods to rural and indigenous communities and habitats for many species.

But in order to deliver all these essential services, the ecosystem needs to be resilient enough to deal with challenges like fires. Forest landscape restoration can be an effective tool to increase forests’ resilience, and lower the negative impacts of wildfires. For instance, in some areas, prescribed burning – a technique that has been practiced by indigenous communities for centuries with the aim to reduce fuel load in forests - can lower the severity of wildfires. UNECE and FAO  continue to support UNECE countries to scale up their forest landscape restoration efforts in support of the Bonn Challenge. As a result, the Astana Resolution was adopted by six countries of the Caucasus and Central Asia, leading to pledges of over 3 million hectares of degraded forests to be restored by 2030. A Ministerial Meeting for countries of Eastern and South-East Europe is planned for 12 October 2021.

It has never been more urgent to revive damaged ecosystems and support local communities. Ecosystems support all life on Earth. The healthier our ecosystems are, the healthier the planet - and its people. This is also one of the messages of the United Nations Decade on Ecosystem Restoration.

I urge member States to carry this overarching message forward as we deal with the many threats faced by our forests. With less than 10 years left to meet the targets of the Sustainable Development Goals, we must undertake serious action to restore our forests, implement sustainable forest management practices and protect vital ecosystems for future generations.