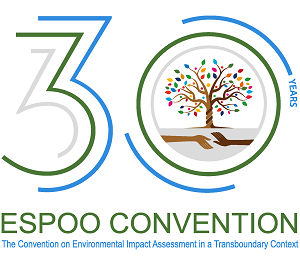 Strategic environmental assessment and environmental impact assessment in a transboundary context have an important role to play in helping countries to achieve a sustainable and green post-COVID-19 economic recovery. This was one of the important messages at the Meetings of the Parties (MoP) to the UNECE Convention on Environmental Impact Assessment (EIA) in a Transboundary Context (Espoo Convention) and its Protocol on Strategic Environmental Assessment (SEA) hosted on-line by Lithuania and co-organized by the UNECE secretariat to the treaties (8-11 December 2020).

On Friday, 11 December, at a high-level segment, delegates celebrated the thirtieth anniversary of the adoption of the Convention in 1991, looking back to the Convention’s roots, showcasing its significant achievements and discussing the outlook for its future development. The Convention – with its practical rules for domestic action and international cooperation to prevent, reduce and control significant adverse transboundary impacts from planned activities in diverse economic fields – was hailed as a milestone multilateral agreement with innovative and forward-looking features shaping international law and promoting    sustainable development.  Its detailed provisions for   providing information to and consulting with authorities and the public of the affected countries contributed to improving the quality of information, environmental governance and transparency in planning and decision-making. These benefits have raised worldwide interest in its procedures.

Embracing that experience, the long-term strategy and the action plan for the Convention and the Protocol adopted at the sessions provide a strategic vision and set operational priorities for the coming decade. The adopted workplans detail concrete actions to be taken by Parties in the upcoming three years.

Application of the Convention to nuclear related activities remained high on the Parties’ agenda. After three years of challenging discussions, the Parties having highly opposing views succeeded to resolve a large number of points of conflict. The long-awaited Guidance on the applicability of the Convention to the lifetime extension of nuclear power plants has been adopted. It intends to help the Parties planning to extend the lifetime of nuclear power plants to deal with complex issues associated with the related transboundary environmental impact assessment procedure. The Implementation Committee will now be able to return to its pending lifetime extension related compliance cases. compliance cases.  The importance of the Guidance was also acknowledged by civil society participants given the large number of aging nuclear power plants in the UNECE region (over 100 reactors will be over 40 years old in the coming 10 years).

An important outcome of the sessions was the adoption   of several decisions on compliance with the Convention and the Protocol as well as several country specific compliance decisions under the Convention. These included decisions requesting Armenia and Azerbaijan to complete their legislative reforms to fulfil their obligations under the Convention;  asking Belarus and Lithuania to conclude their bilateral agreement for the implementation of the Convention and to carry out a post-project analysis with regard to the Belarusian nuclear power station; and reiterating requests to Ukraine to bring into compliance with the Convention its activity at the Danube-Black Sea Deep Water Navigation Canal and the activities on lifetime extension of the Rivne nuclear power plant.

In the Vilnius Declaration adopted on 11 December, the Parties reaffirmed their strong commitment to fully implementing and complying with obligations under the Convention and the Protocol while stressing the need to achieve a healthy and green recovery from the COVID-19 pandemic.

The sessions were attended by over 200 Government officials, including several Ministers and Vice Ministers during the high-level segment on 11 December, representatives of international organizations, civil society, academia and other stakeholders from some more than 40 countries.

Meeting documents are available at: https://www.unece.org/index.php?id=53198

The Convention on Environmental Impact Assessment in a Transboundary Context (Espoo, 1991) is the only international instrument under the umbrella of the United Nations that offers a legal framework to ensure international cooperation in assessing and managing environmental impacts of planned activities, in particular in a transboundary context. In force since 1997, it has 45 Parties, including the European Union. The Convention has been applied over 1,000 times to date and is applied more and more often. This growth reflects the increase in the number of Parties, but also indicates that States find transboundary environmental assessment a valuable procedure for informing and consulting the authorities and the public of neighbouring countries.