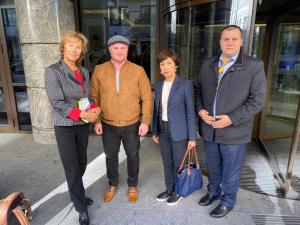 UNECE Executive Secretary Olga Algayerova was in Kyiv on Sunday 9 and Monday 10 October to meet with Government officials to discuss UNECE support to the reconstruction of Ukraine. Since the start of the war, upon official requests for assistance from the government, UNECE has been providing support to the country in its mandated areas of activities.

Amid bombings on the capital and several other Ukrainian cities, the Executive Secretary met with Ihor Korhovyi, Deputy Minister of Communities and Territories Development, and Serhii Komnatnyi Chair of the State housing agency. Planned meetings with the Minister of Energy and the Vice Prime Minister had to be cancelled due to the emergency sitituation.

The Executive Secretary expressed her solidarity with the people of Ukraine, called for the application of the resolutions of the General Assembly of the United Nations on Ukraine’s territorial integrity, the respect of the principles of the UN Charter and adherence to international law. She added her voice to the UN Secretary General’s urgent call for an immediate cessation of hostilities.

Building on longstanding cooperation with the Ministry, UNECE has launched a pilot project to develop the reconstruction master plan for the city of Kharkiv. The master plan is being developed, with pro-bono inputs from the Norman Foster Foundation, UNECE Centre of Excellence on smart sustainable cities, with the active engagement of the local population and local architects. This work is coordinated by UNECE under the UN4Kharkiv Task Force, which comprises more than ten UN agencies who work together to support efforts of the government in developing innovative approaches to rebuilding cities in Ukraine.

As part of this project, UNECE is also preparing Framework Guidelines for the development of reconstruction programmes of cities and regions based on the practical work experience in Kharkiv. UNECE has also mobilized international architects to help the city of Mykolaiv in developing a master plan for its recovery and rebuilding.

Future activities will also include the development of a country profile and action plan to support Ukraine’s reconstruction and long-term development plans in the areas of affordable housing, land management and urban development.

In a Kyiv shelter, the Executive Secretary met with Svitlana Grynchuk, Deputy Minister of Environmental Protection and Natural Resources for European integration.

They discussed the assessment of the environmental damage caused by the war, currently estimated by Ukraine at some EUR 36 bn and projects for the sustainable and green development of Ukraine, where UNECE tools, notably its Multilateral Environmental Agreements, could help the country access private sector or multilateral financing.

They also discussed follow up to the 9th Ministerial Environment for Europe Conference, held from 5-7 October in Nicosia, Cyprus. The Ministerial Declaration adopted in Nicosia, “invited the UNECE secretariat, in cooperation with UNEP, OECD and others, to prioritize assessing the most urgent environmental needs in Ukraine” arising from the military aggression, “based upon the methodology of the UNECE Environmental Performance Review Programme and on the results of ongoing and planned impacts assessments”.

Following its accession to the Industrial Accidents Convention, which became effective on 4 October 2022, Ukraine is now a Party to all five UNECE Environmental Conventions.