Lebanon steps closer towards accession to the Water Convention 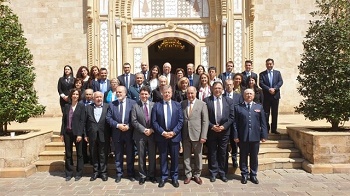 Despite being a relatively water-rich country for the Middle East, water is an increasingly scarce resource in Lebanon. Transboundary cooperation for the sustainable management of its three transboundary watercourses — the Asi-Orontes, the Nahr al-Kabir and the Hasbani-Wazzani Rivers — as well as the transboundary aquifers shared between Lebanon and neighbouring countries, has become increasingly important.

Lebanon reaffirmed its willingness to become Party to the Convention on the Protection and Use of Transboundary Watercourses and International Lakes (Water Convention) during the national high-level consultation “The Water Convention: an opportunity for Lebanon?” held in Beirut on 11 April 2019 under the patronage of the president of the Council of Ministers H.E. Mr. Saad Hariri.

Building on several key steps undertaken since 2015 by Lebanese authorities in considering and studying accession to the Water Convention, which is serviced by UNECE, the national consultation offered a platform for stakeholders to further discuss the implications, benefits and opportunities of joining the Convention, given the specific needs and expectations of Lebanon.

Mr. Fadi Comair, Director General of Hydraulic and Electrical Resources of the Ministry of Energy and Water, highlighted the key role the Water Convention could play in the region in moving  towards a more collective and cooperative management of transboundary waters. The Ministry of Foreign Affairs noted that the Convention, with cooperation being one of its pillars, presents opportunities to support national and regional socio-economic development in a region prone to geopolitical sensitivities.

The Ambassador of the delegation of the European Union to Lebanon H.E. Ms. Christina Lassen confirmed the commitment of the EU to support Lebanon in acceding to and implementing the Water Convention, to reinforce transboundary water cooperation for regional integration and peace. The Vice Chair of the Convention, Mr Harry Liiv, expressed his hope to soon welcome Lebanon among the community of the Parties to the Convention.

This comes as several countries from the Middle East and Northern Africa region including Iraq, Jordan, and Tunisia have also shown interest in acceding to the Water Convention.

During the consultation, key legal, institutional and technical aspects of the Water Convention were discussed and clarified to prompt a concerted national position regarding accession to the Convention. It was recognized that the institutional framework of the Water Convention would allow Lebanon to benefit from other Parties’ experiences as well as from the secretariat’s support in responding to emerging challenges, such as climate change. The Ministry of Justice also noted that implementing the Water Convention could be a chance for Lebanon to enhance its national governance framework and to have a stronger position for the negotiation of new agreements.

International water law has already brought benefits to the country, especially with the ratification in 1999 of the United Nations Convention on the Law of the Non-navigational Uses of International Watercourses, which supported the revision of the agreement with Syria over shared Orontes and Nahr al-Kabir rivers. Lebanon now wishes to seize the opportunity offered by the Water Convention to further strengthen transboundary water cooperation.

Since its entry into force in 1996, the Water Convention has provided an important framework for improving the management of transboundary surface water and groundwater resources in the pan-European region. Its opening to all UN member states in 2016 turned the Convention into a global multilateral legal framework for transboundary water cooperation, offering a solid cooperation framework for many countries worldwide including Lebanon and its neighbouring countries.

The national high-level consultation was co-organized by the Ministry of Energy and Water of Lebanon, UNECE and the Global Water Partnership Mediterranean (GWP-Med), with financial support from the Swedish International Development Cooperation Agency (SIDA).