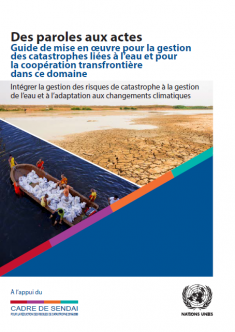 The Sendai Framework for Disaster Risk Reduction 2015–2030 was adopted at the Third United Nations World Conference on Disaster Risk Reduction (WCDRR) in Sendai, Japan, in March 2015 and was subsequently endorsed by the United Nations General Assembly. In order to support the process, a number of targeted Sendai Framework implementation guides are being developed to generate practical and evidence-based guidance for its implementation in close collaboration with States and through the mobilization of experts, thus reinforcing a culture of prevention among relevant stakeholders.

The majority of disasters are water-related and more than 60 of the global freshwater flow is occurring in transboundary basins. This Words into Action Guide has been prepared in the framework of the Convention on the Protection and Use of Transboundary Watercourses and International Lakes (Water Convention) serviced by UNECE in cooperation with UNISDR to support the implementation of the Sendai Framework. It aims to raise awareness on the importance of river basin management and transboundary cooperation in Disaster Risk Reduction, while taking into account climate change adaptation. It provides information on steps that governments and other stakeholders at the different levels can take to harness
the values of river basin management and transboundary cooperation, together with good practices from all over the world and lessions learned in this field.ECE/MP.WAT/56Download the publication in English, French and Russian.