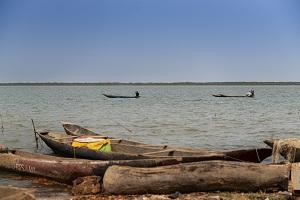 Guinea-Bissau is located in the humid tropical region of West Africa. The country is located on the Atlantic Ocean and is bordered to the north by Senegal and to the east and south by Guinea. It covers an area of 36,125 km2. Guinea-Bissau is composed of two parts: a continental zone and offshore islands.

The water resources of Guinea-Bissau are made up of the surface waters of the Geba-Kayenga River (shared with Senegal) and the Koliba Corubal (shared with Guinea) and its tributaries, as well as multiple aquifers located at different depths throughout the country. These two rivers are the only ones that provide fresh surface water, so their management is a challenge for agriculture and domestic water use in the country. The main shared groundwater is the Senegal-Mauritania Aquifer Basin (SMAB), which is the largest basin on the Atlantic margin of Northwest Africa. This groundwater is a strategic resource for the four aquifer states, The Gambia, Guinea-Bissau, Mauritania and Senegal, whose populations - totalling more than 24 million people - depend on it to a large extent for access to drinking water and for various other uses. Some of the region's major cities, such as Bissau and Dakar, rely on it for an essential part of their water supply. However, the States are faced with several challenges such as the risks associated with salinization, the various sources of pollution or the impact of climate change on the variability of rainfall necessary for groundwater recharge.

In recognition of the importance of establishing a framework for concerted action on BASM, the basin countries, including Guinea Bissau, have initiated a regional dialogue to establish transboundary cooperation for concerted sustainable management of BASM. This initiative is supported by the Secretariat of the UNECE Water Convention, the Geneva Water Hub and the UNESCO Groundwater Resources Assessment Centre (IGRAC), with financial support from the Swiss Agency for Cooperation and the European Union.

His Excellency, Mr. Orlando Mendes Viegas, Minister of State for Natural Resources and Energy of Guinea-Bissau, said: "Accession to the Water Convention offers Guinea-Bissau opportunities both in terms of strengthening governance at the national level and transboundary cooperation. The increasing effects of climate change and the pressure on water resources call for urgent action to deepen existing cooperation in the region".

“I congratulate Guinea-Bissau on its accession”, declared UNECE Executive Secretary Ms. Olga Algayerova. “The growing interest of countries, in Africa and beyond, in acceding to the Water Convention shows how crucial transboundary water cooperation is for peace and security, and sustainable development. UNECE looks forward to sharing experience gained in 25 years under the Water Convention at the forthcoming Meeting of the Parties (29 September-1 October)”.

A growing number of countries are seizing the institutional and legal frameworks of the global water conventions to facilitate cooperative efforts on shared water resources. Guinea-Bissau's accession to the Water Convention follows Ghana in 2020 and Chad and Senegal in 2018, which became the first countries outside the pan-European region to join. The Gambia and Mauritania, with which Guinea-Bissau shares its basins, have also expressed interest in joining the Convention, while many other African countries are among the 20 or so around the world that are taking steps toward accession.

Guinea Bissau's accession to the Water Convention has been supported by the UNECE Water Convention Secretariat with the support of the Gambia River Development Organization. The accession processes are also supported by several other regional partners such as the United Nations Economic Commission for Africa (UNECA) and the Economic Community of West African States (ECOWAS), which shows the important role played by regional organizations in the promotion of global water conventions.

Guinea-Bissau's accession to the Water Convention will enter into force within the next 90 days (12 September 2021).