Regulatory and Procedural Barriers to Trade in Kyrgyzstan (ECE/TRADE/412) 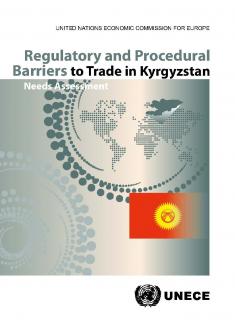 Since 2010 the UNECE has been undertaking studies of regulatory and procedural barriers to trade in selected UNECE member countries with economies in transition, with a view to: assisting countries in their efforts to achieve greater regional and global economic integration; informing donors as to where assistance might be required; and, strengthening policy discussions within the Steering Committee on Trade Capacity and Standards and its subsidiary bodies on where additional work is required.This study summarizes the key findings of the fourth UNECE trade needs assessment, which focuses on Kyrgyzstan. It provides a systemic analysis of regulatory and administrative barriers to trade in the country, along with an in-depth analysis of trade in agricultural products with high export potential. It also highlights the consequences of these barriers for Kyrgyzstan’s export competitiveness and regional integration. A review of trade facilitation and quality assurance development efforts as well as the results of face-to- face interviews with supply chain actors formed the basis of the analysis. The interviews were conducted in 2014 and targeted: traders operating in strategic export industries identified in consultation with the Government; representatives of trade support institutions; providers of transport and logistics services; and, officials from relevant State agencies.This study was prepared by the UNECE Market Access Section in close consultation with public and private sector stakeholders, who were brought together within the context of a national inter-agency working group during the early stages of the assessment to act as the UNECE counterpart. The study takes into account the results of the secretariat’s consultative meeting with the inter-agency working group, which was held in Bishkek, Kyrgyzstan in June 2015. It also takes into account the working group’s written comments, submitted to the UNECE in July 2015.This Study (ECE/TRADE/412) in English and Russian can be downloaded.