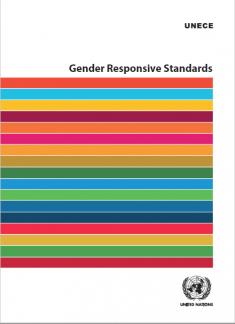 Gender Responsive Standards publication (ECE/TRADE/445) makes the case for mainstreaming gender in the development and implementation of standards. The first chapter places the discussion in the larger perspective of how standards contribute to the achievement of the Sustainable Development Goals of Agenda 2030. It reviews the role of standards as a way of furthering equal participation by both genders in economic decision making; as instruments for women’s health, safety and well-being; and finally, as tools for sustainability reporting. The first chapter also presents the UNECE “Gender Responsive Standards Initiative” as an important example of partnership among standards bodies, governments, the civil society, academia and other key stakeholders for gender equality. The second chapter reviews a subset of standards, namely, Voluntary Sustainability Standards (VSS), as a common instrument used mostly by businesses to establish, incentivise and enforce commitments to sustainable development.  The last chapter introduces recommendations for action directed to standards bodies, governments and donors and international organizations. It calls for all actors to thoroughly analyse the root causes of gender inequality and the impact it may have on standards development and implementation.