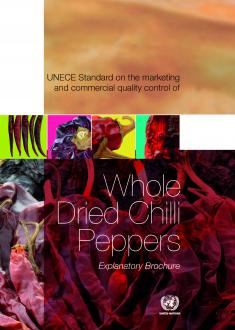 Commercial quality standards for agricultural produce are developed and approved by the United Nations Economic Commission for Europe through its Working Party on Agricultural Quality Standards. These international standards facilitate trade, encourage high-quality production, improve profitability and protect consumer interests. They are used by governments, producers, traders, importers and exporters, as well as international organizations. They cover a wide range of agricultural products, including fresh fruit and vegetables, dry and dried produce, seed potatoes, meat, cut flowers, eggs and egg products.The Explanatory Brochure on the Standard for Whole Dried Chilli Peppers (ECE/TRADE/408) has been developed to harmonize the interpretation of the standard, thereby facilitating international as well as national trade. It addresses producers and traders, as well as inspection authorities. It corresponds to the latest edition of the UNECE Standard for Whole Dried Chilli Peppers (DDP-24), which was officially adopted in 2013. All members of the United Nations can participate on an equal footing in the activities of the Working Party on Agricultural Quality Standards.