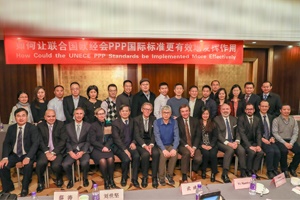 Public Private Partnerships (PPPs) are needed where governments lack the resources and know-how to provide their citizens with critical services. Such services can be key to achieve the Sustainable Development Goals in areas including health, water and sanitation, education and renewable energy. Such projects are highly complex, and if governments are to deliver effective projects, a higher priority must be given to building the necessary capacity, institutions and skills of the public sector. To date, PPP capacity building has tended to be ad hoc and rather small scale. But over the last twelve months, UNECE and its PPP Specialist Centres (see list below) have managed to train some 10,000 officials. This was announced by the heads of the Centres at their first meeting in Beijing, China, on 3-4 December.

Most Centres are from prestigious universities and business schools. These bodies are preparing training materials and detailed case studies while also developing common degree programmes in PPPs. The Centres in their concluding “Beijing Statement of Intent” stressed that the achievement of the 2030 Agenda for Sustainable Development involves designing and implementing a people-first approach to PPPs and agreed to redouble their efforts to this end by inter alia:

Speaking at the event, Mr. Marc Frilet, CEO of the International Centre on Policy, Law and Institutions said that he was excited to see the strength of commitment of everyone to work together so that they could achieve real impact in People-first PPP capacity building.

The Centres will work together in helping UNECE to develop an evaluation methodology for People-first PPPs – a tool for scoring projects, showing governments and the private sector how they can make their projects more SDG-compliant. Already, the Tsinghua University PPP Centre has developed a methodology that evaluates cities and regions in China as to their attractiveness for undertaking PPPs.

Finally, the Centres will support a Code of Conduct that will ensure that their individual and collective efforts follow a strict set of guidelines, including an endorsement of gender balance in their work.