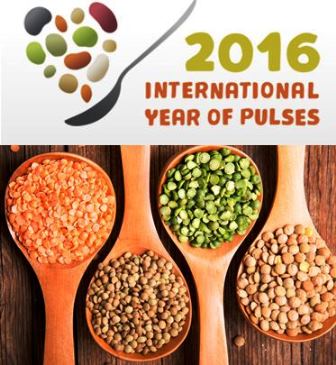 Miracle seeds, power food or  “poor man’s meat” as they are sometimes called – pulses (beans, lentils, chickpeas and more) are the super food that we have certainly all eaten  - but which many of us have never heard of. Perhaps this is why the United Nations General Assembly named 2016 as the “International Year of Pulses” based upon an initiative launched by Pakistan and Turkey.

To mark this International Year in Geneva, an extraordinary event in celebration of this nutritious, balanced and healthy food was organized by the UNECE and the Food and Agriculture Organization (FAO), in cooperation with the initiating countries of Pakistan and Turkey as well as Brazil, Italy and Namibia. Participants had an opportunity to taste a range of traditional dishes made from pulses as well as to receive recipes and information about their history, use and culture.

In Turkey, for example, pulses are so rooted in tradition that, as the Ambassador of Turkey, Mr. Mehmet Ferden Çarikçi, noted, several idioms which refer to pulses have become common expressions in Turkish such as a “chickpea room”, and a “fava bean couch” for describing very small houses. In another example, the Ambassador of Pakistan, Ms. Tehmina Janjua, said: “Pulses are rightly considered the poor man’s protein” and she also highlighted one of the many idioms in Urdu about pulses which, roughly translated, means “a chicken is equivalent to a lentil”.

Pulses are a smart food for rich and poor alike:  smart for those who choose a healthy lifestyle and smart for those who need to overcome hunger, achieve food security and improved nutrition, and implement sustainable agriculture – key elements in achieving the United Nations’ Sustainable Development Goal 2.

While we all have eaten pulses, few of us have likely been presented with such a variety of dishes as were available on 19 April 2016 at the Palais des Nations: – salty, sweet, spicy – something for every taste. Rich in micronutrients, minerals and B-vitamins, and a source of protein with zero cholesterol, low fat and no gluten, pulses are indeed a very healthy food choice. As the Ambassador of Namibia, Ms. Sabine Böhlke-Möller, said  “Pulses have always formed part of the diet of most Namibian communities and even the few Namibians present here today, representing different corners of Namibia, have our own pulses recipes passed on to us through generations.” In Italy too, pulses recipes are passed down from one generation to the next, and are part of Italy's unique gastronomic tradition.

Pulses are friendly to the environment too. They use little water to grow, have a low carbon footprint, are drought tolerant and frost-hardy, and they enrich the soil where they grow. This reduces the need for chemical fertilizers and increases the productivity of farm land. Projects in Namibia, for example, focus on pulses that are heat and drought tolerant, in order to provide a resilient response to a changing climate.

Awareness-raising and celebrating the International Year of Pulses is what the participating countries, organizations and the International Geneva Perception Change Project had in mind when they organized this event. Rediscovering the miracle seeds is what was achieved – for our diets, for food security, for sustainable development, for coping with environmental challenges and climate change, and for cultures and traditions worldwide.

For more information on pulses and the 2016 International Year of Pulses, please visit: http://www.fao.org/pulses-2016/en/  or  contact Ms. Liliana Annovazzi-Jakab at UNECE at: [email protected]