Who is telling the story? Changes in the proportion of women among journalists since 2000

Statistics
Who is telling the story? Changes in the proportion of women among journalists since 2000

In today’s data-rich environment, the news media plays a vital role in identifying and reporting the most useful and relevant topics to the general public. But who is telling the story?

One target of the 2030 Agenda for Sustainable Development is to “Ensure women’s full and effective participation and equal opportunities for leadership at all levels of decision-making in political, economic and public life”. Given the influence of journalism in public life, the proportion of females among journalists might be seen as one of the examples where equal career opportunities should be available for men and women. Based on information from the 9 countries in the UNECE region which have provided data on the number of male and female journalists over the last 15 years, there are some indications that progress is being made towards this goal.

In 2000, four countries – Canada, Hungary, Romania and Slovenia – reported that more than 40% of journalists in their respective countries were women. From 2000 to 2015, this proportion increased in 6 countries out of the 9 presented. In 8 out of the 9 countries, the share of female journalists is now greater than 40%. The largest share, 59%, is recorded in Slovenia. A modest decrease in the share of female journalists was observed in Canada and Romania, while Hungary saw the share drop from 53% in 2000 to 40% in 2015. 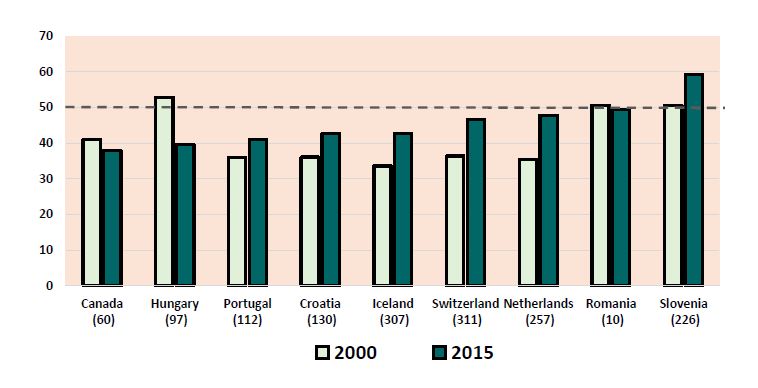 Note: The numbers in brackets refer to the number of journalists per 100,000 economically active persons in each country. A journalist is defined as a person whose profession is to write for newspapers or magazines or to prepare news or features to be broadcast on radio, television or electronic media. Data for Croatia and Slovenia refer to 2014 and Romania to 2013.