Joining the Convention on the Protection and Use of Transboundary Watercourses and International Lakes (Water Convention) makes a difference! Parties to the Water Convention constantly advance water cooperation at the basin, subbasin and bilateral levels. The conclusion of at least 10 new transboundary water cooperation agreements and the entry into force of another 4 in the period 2017–2020 demonstrate the Parties’ strong commitment to effective cooperation. Most of the 144 transboundary river and lake basins reported on by the Parties are covered by agreements or arrangements in force. Nevertheless, there are at least 16 river and lake basins and 15 river and lake subbasins that are not covered by any agreement or arrangement. These are some of the findings of the second report on implementation of the Water Convention, published by the United Nations Economic Commission for Europe (UNECE) on the occasion of the ninth session of the Meeting of the Parties to the Water Convention (Geneva and online, 29 September–1 October 2021).

The report builds on the national reports submitted by all the Parties to the Convention in the framework of the second reporting exercise on Sustainable Development Goal indicator 6.5.2 and under the Water Convention. It covers the period 2017–2020 – a crucial phase in the evolution of the Water Convention, marked by the enlargement of the treaty’s membership through the accession of several countries from outside the UNECE region and the initiation, by other such countries, of their national processes towards accession. For the first time, the geographical scope of the report covers the implementation of the Convention by two of its new Parties from beyond the UNECE region (Chad and Senegal). 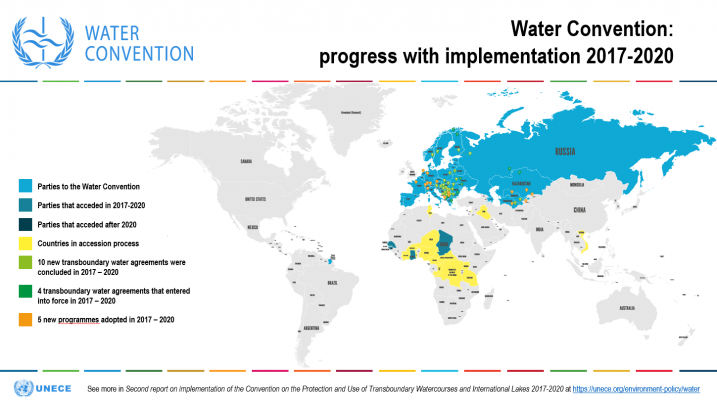 The report confirms that, where agreements for transboundary waters are in place, in most cases, participating countries take part in a joint body established to facilitate implementation of an agreement. Joint bodies, such as bilateral or basin commissions, act as effective platforms for day-to-day dialogue and cooperation. However, not many joint bodies are tasked with dealing with climate change adaptation, public participation and consultations and early warning of water-related diseases, despite the critical importance of these areas for the well-being of populations and ecosystems in transboundary basins. 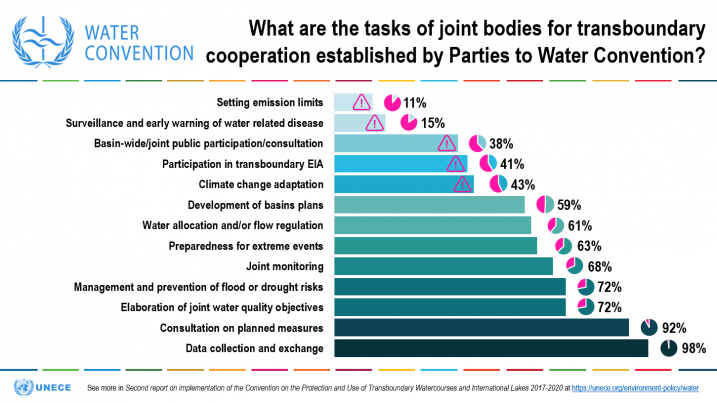 Despite overall positive trends, some Parties face difficulties in the negotiation and adoption of agreements for transboundary waters and, simultaneously, the establishment of joint bodies. This is identified as a particular challenge in basins where other riparian countries are not Parties to the Water Convention, showing the importance of motivating these neighbouring countries to join the Convention. Challenges also relate to exchange of data and information: in at least 24 river and lake basins, riparian countries do not exchange data and information at the basin level.

The report includes some observations on the implementation of the Convention in different subregions. For example, Parties’ responses regarding the existence of a coordinated early warning or alarm system for accidental water pollution show that such systems are much less common in the Caucasus and Central Asia, Northern Europe and sub-Saharan Africa subregions, better represented in the Southern Europe subregion and relatively widespread in the Eastern Europe and Western Europe subregions. The findings on stakeholder participation raise concerns for Parties in the Caucasus and Central Asia, where, in many cases, Parties indicated the absence of any form of public participation and stakeholder involvement in transboundary water cooperation. At the same time, the findings appear most positive for Parties in sub-Saharan Africa, where the most advanced forms of public participation (i.e. advisory and decision-making roles for stakeholders on a joint body) were reported to be in place. This demonstrates the usefulness of the Convention’s global opening, now enabling exchange of experience at the global level.

The report concludes with a series of recommendations addressed to the Parties, aimed at assisting them to identify ways to strengthen implementation of the provisions of the Convention and improve understanding of its requirements, including by using the institutional platform of the Convention. The programme of work for 2022–2024, to be adopted at the ninth session of the Meeting of the Parties, aims to assist Parties and non-Parties in overcoming many of the challenges highlighted in the report.