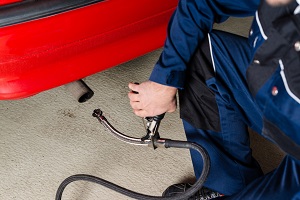 As of 1 September 2017, consumers in Europe will benefit from more accurate information on vehicle fuel consumption and emissions thanks to the entry into force of a new standard testing procedure (the Worldwide harmonized Light vehicles Test Procedure, or WLTP).

A Global Technical Regulation on WLTP was developed and finally adopted by UNECE’s World Forum for Harmonization of Vehicle Regulations in March 2014, at the request of policy makers, the automobile industry and consumers. However, GTRs require incorporation into national or regional legal frameworks before they can be applied.

The WLTP test cycle offers a more accurate testing method than the existing system, known as the New European Driving Cycle (NEDC), which, while reviewed in 1996, dates back to the 1970s. WLTP better approaches real driving conditions, with more modern and realistic driving scenarios, and factors in dimensions such as air conditioning and heated seating that increase fuel consumption.

The WLTP test cycle also closes many of the loopholes in the NEDC test procedure, making it more difficult for car manufacturers to optimize test results at the cost of real fuel efficiency and pollutant emissions such as particles and Nitrogen Oxides. It was the manipulation of the emissions test and its results that was at the centre of the 2015 emissions scandal, which involved a number of car manufacturers. It is estimated that fuel consumption figures using WLTP will be 10 to 20% higher than those under NEDC.

Thanks to WLTP, consumers buying new models can be assured that the fuel efficiency declared by manufacturers will be more representative of real fuel consumption, and know that there will be no surprises at the service station. In addition, the improved accuracy of CO2 emissions measurements will support governments in determining appropriate policies and regulations.

While WLTP greatly improves the accuracy and consistency of test results, it is still a laboratory procedure designed to facilitate repeatability and reproducibility of the test. The EU will be using WLTP to complement the EU’s Real Driving Emissions (RDE) testing, which is performed on-road. The World Forum is now considering the incorporation of RDE testing within its international regulatory framework.

WLTP was designed based on data gathered in countries all around the world. It is therefore globally applicable, and can help to improve the accuracy of vehicle testing procedures worldwide, supporting effective policies at city, national and regional levels to mitigate emissions, particularly CO2 and greenhouse gases.

UNECE encourages all countries to implement WLTP. The World Forum will develop a UN Regulation on WLTP, which will support countries for its use.

The World Forum is also developing further provisions within WLTP to cover more precisely the measurement of emissions for all types of powertrain technologies, including electric and hybrid vehicles.

The World Forum for Harmonization of Vehicle Regulations (WP.29) is a Working Party within the United Nations Economic Commission for Europe's Inland Transport Committee. It manages three Global Agreements on vehicles. Any country that is member of the United Nations may participate in the activities of the World Forum and accede to the Agreements.

With WLTP, the test cycle ran by the type approval authority in a laboratory is performed on a test bench with a running car, which is accelerated and decelerated according to a well-defined speed profile, allowing the measurement of not only the level of gaseous pollutants, but also of the CO2 emissions and, thus, the fuel consumption level.

The Real Driving Emission (RDE) test procedure developed by the European Commission measures the emission performance of vehicles on roads according to random acceleration and deceleration patterns. Europe will be the first region in the world to introduce such on-the-road testing. Due to variations in real-life conditions (such as temperature and air pressure), RDE test results are difficult to reproduce. WLTP results will serve as a benchmark for RDE testing.

CO2 emissions (in g/km) are directly linked to fuel consumption (FC in l/100 km). CO2 emissions are not pollutant emissions as such but need to be regulated as they contribute to global warning.