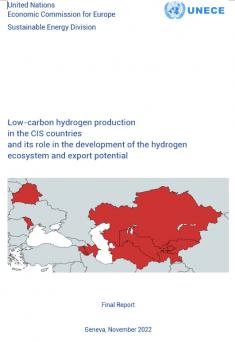 Low-carbon hydrogen deployment is crucial for achieving the Paris Agreement goals and for deep decarbonization in hard-to-abate sectors (in particular, in heavy long-distance transport, in the steel industry, fertilizer production, etc.). By the end of 2022, more than 70 countries around the world are already involved in drafting of national hydrogen strategies or have already adopted them, demonstrating that hydrogen is one of the strategic priorities for energy sector or the whole economy development. The former USSR countries of Central Asia, Caspian region and Eastern Europe, in contrast, are still at the initial stage of considering hydrogen role in a long-term strategy (except Russia, which adopted a hydrogen roadmap in 2020 and has been drafting a national hydrogen strategy since September 2021). Armenia, Azerbaijan, Belarus, Republic of Moldova, Kazakhstan, Kyrgyzstan, Tajikistan, Turkmenistan, Uzbekistan, covered by this study, combined cover an area and population which is about double that of Argentina, and their combined CO2 emissions is about that of Germany. Many of these countries are significant players in the energy sector in their regions or across Eurasia as a whole.