Carbon neutrality through synergies between gas and renewable energy

Carbon neutrality through synergies between gas and renewable energy 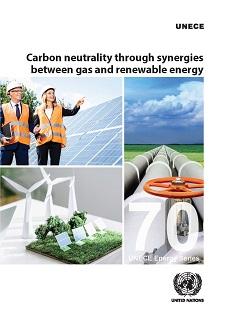 The United Nations Economic Commission for Europe’s (ECE) Group of Experts on Gas teamed with the Group of Experts on Renewable Energy to identify and explore synergies between variable renewable energy (VRE) sources and natural gas. These synergies could provide the required affordably and flexibility needed to integrate an ever-increasing share of VRE in the energy mix. This publication distinguishes two phases. The first phase, which focuses on the short term, shows how to use flexible, cost-competitive, and agile natural gas-fired generation as an enabler of VRE integration. The second phase, which spans over the medium and long-term, enlarges the scope of the renewable energy concept to cover not only renewable electricity, but also renewable gases. The second phase is based on the hybrid energy system concept which envisages the use of new gases (renewable, decarbonised, and low carbon), together with the sectoral integration concept, as drivers to advance VRE penetration and thus reduce greenhouse gas emissions. This publication provides several recommendations to ECE member States in developing coherent policy and regulatory frameworks for renewable energy – including renewable gases – across the ECE region.