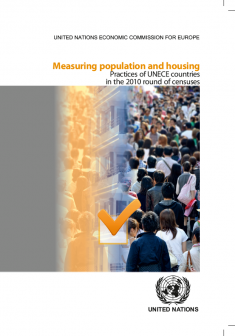 This publication reviews the practices followed by countries in the UNECE region (covering Europe, Central Asia and North America) during the 2010 round of population and housing censuses. The aim is to compare the different approaches and practices adopted by the countries and to assess the compliance with the Conference of European Statisticians (CES)

Recommendations developed for the 2010 census round  (referred in the publication also as “CES Recommendations” or “CESR”). This information may be useful when comparing the results in different countries.
The publication has been prepared by the Statistical Division of the UNECE. It is based mainly on papers  prepared by the UNECE Steering Group on Censuses and the nine Task Forces established by UNECE on various census-related topics, as part of the preparation of the Conference of European Statisticians Recommendations for the 2020 round of censuses.  Additional material and information collected for the UNECE Census Wiki , or provided by countries during the preparation of the publication was also used.
The material presented in the publication is based on the results of an online survey  carried out in 2013 by UNECE among its member countries to collect information on practices followed in the 2010 census round, and on tentative plans for the 2020 round.  A similar survey was carried out by UNECE in 2004 to collect information on national practices in the 2000 census round. Download: Measuring population and housing. Practices of UNECE countries in the 2010 round of censusesПерепись населения и жилищного фонда. Практика стран ЕЭК ООН в раунде переписей 2010 года