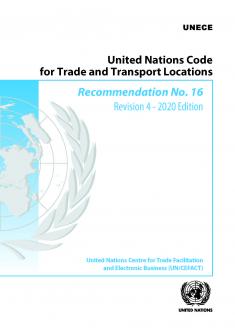 Work on the United Nations Code for Trade and Transport Locations (UN/LOCODE) was started in 1972 by the United Nations Economic Commission for Europe (UNECE) Working Party on Facilitation of International Trade Procedures, which was the predecessor of the United Nations Centre for Trade Facilitation and Electronic Business (UN/CEFACT). In 1980 the first edition of Recommendation N°16 on UN/LOCODE was released after consultation with multiple international organizations, which included the United Nations Economic Commission for Latin America and the Caribbean (ECLAC), the United Nations Economic and Social Commission for Asia and the Pacific (ESCAP) and the International Air Transport Association (IATA). A second edition, which included a manual on maintenance procedures, was published in 1995. A third edition was put forward in 1998. This consolidated fourth edition of Recommendation N°16 (ECE/TRADE/459) includes amendments proposed by a project team established by UN/CEFACT. UN/LOCODE is a five-character code system to identify all named geographic places which serve, in any way, as a place related to international trade. This Publication (ECE/TRADE/459) is available in English, French and Russian for download.