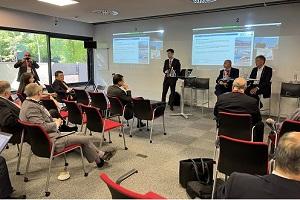 Public-Private Partnerships (PPPs) have become one of the preferred mechanisms for financing the Sustainable Development Goals (SDGs) in many countries in the UNECE region. Through its approach to PPPs for the SDGs, UNECE supports countries identifying, developing and implementing infrastructure projects through PPPs with people at the core that contribute to sustainable development and generate ‘value for people’ and ‘value for the planet’.

To promote the financing and development of PPP projects aligned with the SDGs, UNECE convened a Capacity-Building event on 6 May 2022, on the last day of the 6th UNECE International PPP Forum (4-6 May 2022, Barcelona, Spain). This interactive event, entitled “Roundtable discussion for Government officials from Eastern Europe, Central Asia and the Caucasus: Dialogue with investors/lenders” convened Government officials from Armenia, Georgia, the Kyrgyz Republic, Moldova, Tajikistan and Uzbekistan, to present PPP projects to potential investors and lenders from Multilateral Development Banks, investment banks, international organisations, private companies and project developers.

The projects were presented across different sectors – renewable energy, education and sustainable transport – and along the UNECE five desirable PPP outcomes for the SDGs. The roundtable discussion was not only an opportunity to promote a dialogue with potential investors and lenders, but also amongst countries.

“I am convinced that new PPP projects in Moldova must be aligned with the UNECE approach to PPPs for the SDGs not only to be fiscally sustainable but also to contribute to sustainable development” stated Ms. Tatiana Savva, Deputy Director of Public Property Agency of Moldova.

The event also included a presentation by Government officials from Ukraine on the immediate infrastructure needs as part of the country reconstruction, as the World Bank estimated the war to have already caused $60 billion in physical damage to buildings and infrastructure.

“PPPs can be used as a mechanism to finance and rebuild the infrastructure of Ukraine, in line with the SDGs”, said Ms. Iryna Novikova, Economic Advisor to the Prime Minister of Ukraine. Ms. Novikova also called for a roundtable with UNECE, international financial institutions and the private sector in the coming months, to prepare, design and finance PPP projects to rebuild the infrastructure of Ukraine which will be aligned with the SDGs.

More information on the UNECE PPP work can be found at http://www.unece.org/ceci/ppp.html