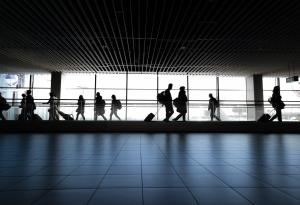 The COVID-19 pandemic has brought about immense changes in how people move around the world. International travel ground almost to a halt at the onset of the crisis, as restrictions were imposed and borders closed. Internal migration, too, was restricted in many countries as lockdowns were declared.

A year and a half later much has changed, but flows and behaviours of international and internal migrants are still very different from their pre-pandemic levels and patterns.

How do we know this?

Statistics on migration are produced by national statistical offices (NSOs) in a variety of ways. Surveys, data gathered from border crossings, population registers, and many other kinds of sources are used to gather information about how many people migrate, when and for how long, their characteristics and their reasons for moving. Yet many of these sources have themselves been disrupted by the pandemic. The reliability of administrative sources may have been affected, while face-to-face surveys have been difficult or impossible to conduct in some countries due to social distancing and restrictions on movement. NSOs have had to adapt their methods, for instance by moving to online or telephone surveys, which bring special challenges when trying to gather an accurate picture about migrants, especially those who have migrated without documentation.

Recognizing the unprecedented challenges faced by NSOs as they try to track the impacts of the pandemic on migration, UNECE’s annual migration statistics week this year had a special focus on the pandemic. Experts from across the region and beyond shared their experiences in discussions on measurement challenges and solutions; the impacts of the pandemic on immigrants and related population groups; and the consequences of the decline in migration flows, among others.

In many countries with a large immigrant population, both the migrants themselves and their families in their country of origin have been profoundly affected by pandemic-related restrictions. In South Africa, for example, many migrants send home remittances, and a snap survey in early 2020 found significant disruptions to these remittance flows as the migrants’ earnings dropped.

Worldwide, the experts heard, the number of new refugees and asylum-seekers dropped sharply during 2020. UNHCR experts explained that the number was about 1.5 million fewer than would have been expected without the pandemic, although the pandemic was also responsible for triggering new displacements.

In Estonia, a comprehensive picture of migration is built up by using a ‘signs of life’ approach to estimate unregistered migration. This means that the more often a person is ‘detected’ in administrative sources — e.g. by attending school, drawing a family allowance, visiting a doctor, obtaining employment, or participating in military service — the greater the certainty that the person is correctly included in the population register and has not left the country. Similar approaches are used in other countries such as Canada, the United Kingdom and the United States, where the absence of unified national population registers means that these countries must adopt a more complex approach, linking together diverse data sources to build a complete picture of how many people are entering or leaving the country.

To support countries of Eastern Europe, the Caucasus and Central Asia as they tackle the current exceptional challenges in migration statistics, UNECE has developed a harmonized survey module for measuring migration and remittances, which has now been specially adapted to the unique data collection requirements brought about by the pandemic, such as the need for remote interviewing, and which now includes questions specifically designed to capture the impacts of the pandemic both on migration and on the remittances sent by migrants.

The UNECE survey module enables countries to gather information about the reasons, intentions, occupation and length of stay of recent and returned migrants; whether the pandemic affected their travel plans, documentation, health or employment status; and their intended and actual remittance behaviour both when borders were closed and when they reopened. Countries will soon begin including this adapted survey module in their surveys of migration and remittances. Such information is vital as public authorities and service providers attempt to put in place policies to adapt to the changes in migration patterns, labour markets and living standards, which have been profound in this region where migration volumes have undergone massive change. Tajikistan, for example, saw 88 per cent fewer immigrants and 67 per cent fewer emigrants in 2020 compared with 2019, and in the Republic of Moldova these figures were 57 per cent and 77 per cent, respectively.