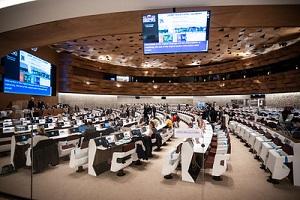 This week nearly 450 participants from close to 50 countries attended the seventh and fourth sessions of the Meetings of the Parties to the Aarhus Convention (Convention on Access to Information, Public Participation in Decision-making and Access to Justice in Environmental Matters) and to its Protocol on Pollutant Release and Transfer Registers (PRTRs), and their Joint High-Level Segment. With the Aarhus Convention now celebrating 20 years in force, participants looked at achievements, addressed challenges in promoting the rights guaranteed under the treaties and set priorities for the future work.

At the opening to the Joint High-Level Segment of the two treaties held on 21 October 2021, the UNECE Executive Secretary Olga Algayerova, delivered a statement by UN Secretary-General António Guterres to highlight the role of the treaties for furthering environmental rights. "Over the past two decades, the Aarhus Convention and its Protocol on Pollutant Release and Transfer Registers have inspired and advanced environmental democracy across the globe, despite significant challenges.”

Aarhus Parties, international organisations and civil society welcomed the accession of Guinea-Bissau to the Convention, the first-ever country from outside of the UNECE region to do so. This marks a significant milestone in the Convention’s history and provides a great opportunity for strengthening environmental democracy in the country.

Expressing deep concern on the safety of people exercising their rights under the Convention, Aarhus Parties took a strong stand by establishing a rapid response mechanism to protect environmental defenders.

Further, Meeting of the Parties adopted  20 decisions on compliance aimed at assisting individual Parties to improve their legislation and practice in such areas as oil and gas extraction, gold mining, nuclear power plants, renewable energy, power lines, urban and spatial planning, access to justice, litter, forestry and the safety of environmental defenders.

It was noted that in some cases, the measures that were taken to help curb the spread of the COVID-19 pandemic also had the negative effect of curtailing the public’s rights, and it was stressed that the environmental and human rights outlined in the Convention still remain in effect during a pandemic and should not be limited on this basis. The adoption of recommendations on electronic information tools by Aarhus Parties was a timely step to ease countries’ transition to digitalisation and ensure that access to information, justice, and public participation in environmental matters can still take place in a digital format.

Parties to the Protocol on PRTRs agreed on the way forward for developing this treaty further to make PRTRs a useful tool for decision-making in various areas, such as public health, resource consumption, urban planning, emissions reduction, and more. Parties and stakeholders stressed the need to promote the Protocol both within the region, and globally, so that the public, governments, NGOs and other relevant stakeholders are aware of the benefits PRTRs provides and can utilize them better.

Parties to both treaties and a wide range of stakeholders adopted the Geneva Declaration on Environmental Democracy for Sustainable, Inclusive and Resilient Development thereby reinforcing their commitment to promoting the transparent and participatory infrastructure and spatial planning.

The Declaration stresses that “no physical construction should compromise ecosystems and biodiversity or undermine the enjoyment of human rights. To reduce the risk of supply chain disruption, infrastructure systems should provide solutions that respect cultural heritages and diversity, and recognize the needs of various groups, embrace nature conservation norms, and use sustainable technologies and local and sustainable materials to enhance resource efficiency and create local jobs.”

The Declaration recognizes the advantages of large-scale infrastructure projects and spatial planning and general development in countries’ economic recovery plans, e.g., in expanding opportunities for work, travel, and economic growth. At the same time, it acknowledges that such projects can have a significant impact on the daily lives of communities and their surrounding environment. The Geneva Declaration looks to reenforce these benefits by incorporating environmental democracy into each step of the planning process so that a more sustainable outcome is achieved. Adhering to the Convention’s requirements and applying PRTRs to these projects will mitigate such negative effects.  The Geneva Declaration commitments will also help to uphold the recently recognized human right to a safe, clean, and sustainable environment. Participants throughout the meetings included delegates from Convention and Protocol Parties, as well as from Guinea-Bissau, Jordan, Canada, and representatives of United Nations agencies, international and regional organizations, international financial institutions, Aarhus Centres, business, industry and academia.

The sessions were also attended by representatives of more than 80 NGOs. 15 side events on a wide range of topics were organised in the lead up to the meetings.

The Aarhus Convention was adopted in Aarhus, Denmark, in June 1998 and signed by the European Community and 38 countries from all subregions of UNECE. It entered into force in October 2001.