With fish production estimated to reach 204 million tonnes in 2030, illegal, unreported and unregulated (IUU) fishing costs up to $23 billion every year to countries and affects one in every five fish caught. UNECE member states face these issues both on the high seas and in areas within national jurisdiction.

The Agreement on Port State Measures (PSMA) came into force in 2016 to combat IUU. It is the first binding international agreement to prevent, deter and eliminate IUU fishing, by preventing illegal fishers from using ports and landing the illegal catches. The Agreement counts 68 parties, including 10 UNECE member States (Albania, Canada, Denmark, France, Iceland, Montenegro, Norway, Turkey, United Kingdom, and United States of America) and the European Union as a member organization. On 8 February 2021, the Russian Federation announced that it was becoming a Party to the PSMA at the 34th session of FAO’s Committee on Fisheries.

The unique identification of the PSMA-designated ports is an important element for a successful implementation of the Agreement. The United Nations Code for Trade and Transport Locations (UN/LOCODE) – a global standard developed by UNECE’s UN/CEFACT – is the preferred choice to guarantee consistency and accuracy when designating ports, with each one assigned a five-letter code (e.g. “ES VGO” for the port of Vigo in Spain, Europe’s largest fishing port). UN/LOCODE has an established role as an international standard to identify locations and has already assigned a code to 226 ports (49%) out of 462 PSMA-ports.

UNECE will collaborate with FAO to ensure that all PSMA-designated ports are assigned with a UN/LOCODE, and to develop a tailored maintenance mechanism. This will ensure the consistent identification of locations in trade and transport and will support FAO by providing an international coding system. FAO also plans to use UN/LOCODE in the Global Record of Fishing Vessels, Refrigerated Transport Vessels and Supply Vessels, another key tool to combat IUU fishing and foster sustainable fishery management.

This collaboration will help prevent vessels engaged in IUU fishing from using ports and landing their catches. This will also reduce the incentive for such vessels to operate as it will block their access to national and international markets. Furthermore, PSMA mandates parties to establish a system to exchange information on port inspections with stakeholders such as the flag and coastal States. The United Nations Fisheries Language for Universal Exchange (UN/FLUX), developed at UNECE, provides a global standard for data exchange such as information about a vessel and a fishing trip to a coastal state. The geographical coverage of the standard is global and the standard already enables the monitoring of 85,000 fishing vessels worldwide.

The implementation of the UN/FLUX messaging standard can support PSMA parties in establishing a cost-effective tool to exchange information required by the Agreement in an effective, transparent and efficient manner. This also supports traceability of traded fish from the fishing vessel to the consumer, which prevents illegal fish from entering markets, thus reducing overfishing and promoting sustainable fisheries management.

The effective implementation of PSMA contributes to SDG14 on sustainable use of marine resources, and its targets 14.4 on ending overfishing, illegal, unreported and unregulated fishing and destructive fishing practices. 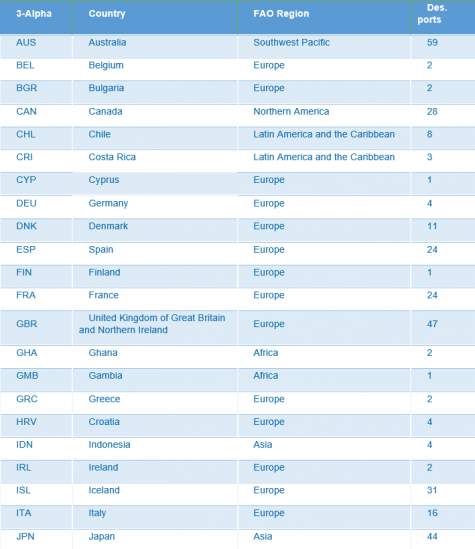