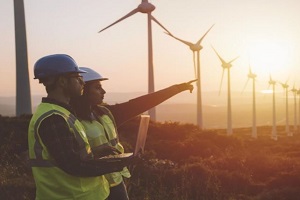 Women are widely under-represented in developing the standards that affect so many areas of our lives, from the infrastructure on which economies depend, to the products we consume every day and the technologies needed to address a wide range of sustainability challenges.

Many of these standards do not adequately address how women and men may be affected differently.

A 2017 report by the UK’s Trades Union Congress found that ill-fitting personal protective equipment (PPE) hampered the work of 57% of women. In the emergency services, only 5% of women said that their PPE never hampered their work.

Standard values used to set heating and air conditioning in offices have been found to overestimate female metabolic rate by as much as 35%, meaning that current offices are on average five degrees Celsius too cold for women.

The need for standards that account for uneven gender distribution in different sectors of the economy is also important – covering for example exposure to pesticides in seasonal agricultural work, or harmful chemicals commonly used in nail salons – areas where women make up the majority of workforces.

As another dimension, compliance with standards for international trade is out of reach for many smaller women-owned businesses, especially in lower income countries, due to barriers including costs related to certification or lack of awareness.

These issues not only hamper progress towards Sustainable Development Goal 5 on gender equality, but also undermine the potential of standards as powerful tools to support sustainable development.

By signing the Declaration, developed at UNECE, standards bodies pledge to create and implement gender action plans. The objective is to support more gender-balanced and inclusive standards development processes, and to strengthen the gender-responsiveness of standards themselves, including by conducting gender-based analysis for the development or revision of all standards. They also commit to tracking progress, collecting and disseminating relevant data, success stories and good practice.

Commitments made by signatory bodies as part of their action plans include:

The Declaration’s signing ceremony featured the launch of a study which makes the case for mainstreaming gender in the development and implementation of standards. The study reviews the status of and approaches to gender responsiveness in standards development and use, and provides recommendations for action by standards bodies, governments and donors and international organizations.

UNECE Executive Secretary Olga Algayerova stated “Today we are committing to promote the greater inclusion of a gendered lens in standardization; and expressing our resolve to make standards and the standards development process more gender-responsive. UNECE develops standards and normative documents in fields of trade, transport, energy and many more, supporting countries to implement the 2030 Agenda for Sustainable Development. We are uniquely placed to host this partnership, bringing the global standardization community and member States together to empower women and girls. This is a moment of celebration, but much remains to be done.”

One example of UNECE’s wide-ranging work to advance women’s economic empowerment as a driver of gender equality is a UN/CEFACT initiative to identify barriers and approaches to increasing women’s participation in trade facilitation, aiming to strengthen the gender-responsiveness of standards and recommendations in international trade and electronic business processes.

The Declaration has been developed at UNECE as part of the Gender-Responsive Standards Initiative, a diverse working group composed of representatives from standardization bodies, gender specialists, representatives of regulatory bodies, policymakers, NGOs, UN organizations and members of the academic community.

The Initiative aims to strengthen the use of standards and technical regulations as powerful tools to attain SDG 5 (Achieve Gender Equality and Empower all Women and Girls), integrate a gender lens in the development of both standards and technical regulations, as well as elaborate gender indicators and criteria that could be used in standards development. The Initiative has been developed under UNECE’s Working Party on Regulatory Cooperation and Standardization Policies (WP.6)