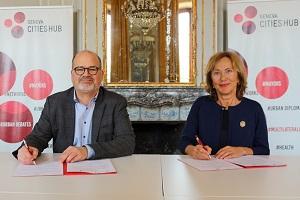 From the climate crisis to inequalities, urban areas play an increasingly central role in tackling key sustainable development challenges. Strengthening the connections between city-level actors and facilitating their engagement in international policy debates is therefore vital to scale up innovative approaches based on concrete experience.

In this spirit, Olga Algayerova, Executive Secretary of the United Nations Economic Commission for Europe, and Sami Kanaan, member of the Executive Council of the City of Geneva and President of the Geneva Cities Hub, signed a Memorandum of Understanding on 7 March 2022 to formalize and strengthen their cooperation. Since the establishment of the GCH, the UNECE has been one of its principal partners.

UNECE is one of the five UN regional commissions and it is committed to provide cities with a voice in relation to sustainable urban development, which lies at the center of its areas of interest. As such, it organizes the Forum of Mayors to enable city leaders to exchange experiences, present their efforts to tackle urban challenges and discuss how to work together in the context of the UN. As part of their ongoing cooperation, the Geneva Cities Hub is an official partner of the Forum.

UNECE Executive Secretary Olga Algayerova affirmed that “Mayors play a crucial role in fostering sustainable development. Collaboration with partners such as Geneva Cities Hub is vital to push forward the important linkages between action at the local, regional and international level as part of a new and inclusive multilateralism”.

“This MoU provides a great framework for enhanced cooperation on all matters related to the Forum of Mayors and its Declaration adopted in 2020. It constitutes an important step towards our common goal, which is to advance the participation and engagement of cities in multilateralism”, said Kamelia Kemileva, GCH Co-Director, during the signing ceremony.