Shared by Algeria, Libya and Tunisia, the North Western Sahara Aquifer System (NWSAS) is North Africa’s largest groundwater reserve, supporting the lives and livelihoods of 4.8 million inhabitants. A vital water resource extending over 1 million square kilometres in a highly arid environment, the aquifer system is naturally vulnerable due its low natural recharge. Pressures on water have been increasing over the past three decades with the rise of new industrial agriculture, with water abstraction currently standing at 3 times the aquifer’s natural recharge rate (1 billion cubic meters per year). This results in pressures on water and soil quality, leading to a vicious cycle of reduced agricultural productivity and increased energy demand for pumping from deep wells. Fragile ecosystems, such as wetlands, are consequently under threat and local populations are exposed to significant vulnerability.

A report launched today underlines the urgency of taking action across borders and sectors to address the threats leading to the degradation of the aquifer system.  Worldwide, transboundary groundwater resources are commonly not covered by formal cooperation arrangements, yet they constitute important sources of water for drinking and other uses, are susceptible to pollution, complex to investigate and commonly inadequately understood.  The NWSAS is a rare example of a cooperation arrangement and data exchange on a transboundary aquifer.

Focusing on the interlinkages between energy, water, land and ecosystem resources, the new transboundary “nexus” assessment analyses cross-sectoral dynamics and identifies integrated solutions to render resource management more sustainable and efficient. The assessment was carried out under the Water Convention by UNECE, Global Water Partnership Mediterranean and the Sahara and Sahel Observatory, with the support of the Swedish International Development Cooperation Agency.

While sectoral measures, such as improving the efficiency of irrigation, can contribute to alleviating pressures, the nexus assessment provides examples of how cross-sectoral collaboration is the key to provide the highest level of water, energy and food security, as well as adaptation in the face of climate change. Following a participatory process of consultation with governments and local stakeholders, the report proposes an integrated package of 15 high-priority, cross-sectoral solutions. These range from implementing governance changes, to adopting economic and policy instruments, and investing in infrastructure and innovation.

The water-energy-food-ecosystems nexus approach provides for the combination of diverse elements to address the challenges; for example, it proposes the adoption of new technologies, alongside the reviving and valorization of traditional agricultural practices; and implementing national and transboundary-level strategies, alongside a renewed focus on local resource management. 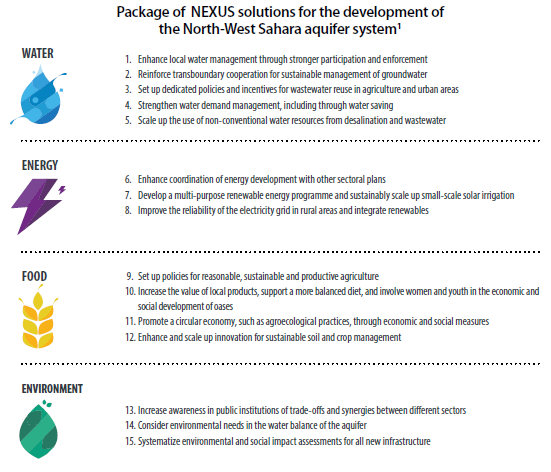 The analysis emphasizes how strategic partnerships and cross-sectoral and transboundary cooperation are essential in order to reap maximum societal benefits. For instance, one of the solutions proposed consists of upscaling the use of non-conventional water resources using desalination, wastewater treatment, and drainage water treatment or reuse. In this context, the concurrent deployment of renewable energy – solar power in particular – could help create major benefits for both the water and energy sectors. Conversely, lack of water-energy coordination can lead to adverse results: if small scale-solar irrigation were deployed without appropriate water and environmental regulation, pressures from higher water abstraction would increase.

Notes to editors:About the assessment

This Nexus Assessment of the NWSAS, resulting in publishing the report Reconciling resource uses: Assessment of the water-food-energy-ecosystems nexus in the North Western Sahara Aquifer System: Part A - "Nexus Challenges and Solutions", was carried out under the Convention on the Protection and Use of Transboundary Watercourses and International Lakes (Water Convention), applying an assessment methodology developed in its framework, in close cooperation with the Global Water Partnership Mediterranean and the Sahara and Sahel Observatory as part of the project, “Making water cooperation happen in the Mediterranean (Med Water Matchmaker)”, funded by the Swedish International Development Cooperation Agency. The assessment also built on synergies with the Water, Climate and Development Programme (WACDEP) of the Global Water Partnership.

The nexus assessment included national consultations and two transboundary workshops, and was informed by an analysis of the sectoral and inter-sectoral challenges experienced by the different sectors, including though the use of a novel integrated water-energy-agricultural model for the basin. This participatory process across countries and sectors was carried out under the lead of the NWSAS Consultation Mechanism which provides an established framework for cooperation between the three countries.

About the NWSAS Consultation Mechanism

Since the 1970s, Algeria, Libya and Tunisia have been developing cooperation in information exchange and consultation that inform the management of the shared aquifer. The NWSAS Consultation Mechanism, established in 2006, has a work programme with a budget, and operates through annual meetings of the water directors of the three countries.

About the Water Convention

The Convention on the Protection and Use of Transboundary Watercourses and International Lakes, the secretariat of which is provided by UNECE, has, since its entry into force in 1996, provides an important framework for improving the management of transboundary surface water and groundwater resources in the pan-European region. In March 2016, the Water Convention became a global multilateral and intergovernmental legal framework for transboundary water cooperation, open for accession to all UN Member States.