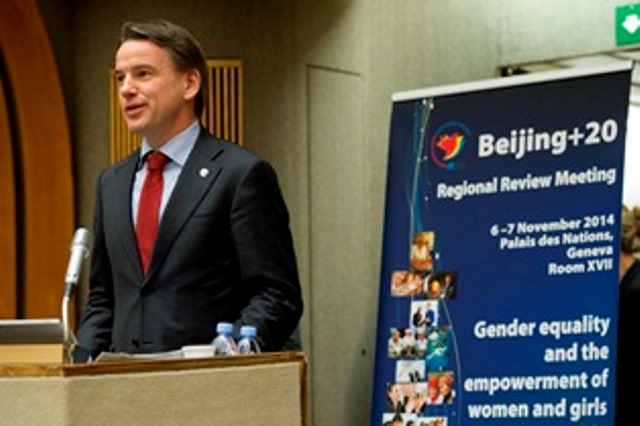 On 6 -7 November 2014, over 500 stakeholders from UNECE member States’ governments, civil society, academia, international organizations and the private sector came together at the Palais des Nations to review the progress and setbacks of the past 20 years in the implementation of the Beijing Platform for Action, a landmark policy framework that was adopted at the UN 4th World Conference on Women in 1995.

The Regional Review Meeting, which was co-hosted by UNECE and UN Women, focused on the long-term trends as well as emerging obstacles in gender equality and the empowerment of women. Although most countries reported significant legislative progress, it was widely agreed that implementation of laws has lagged far behind. Violence against women remains a pervasive problem. Discriminatory stereotypes persist and hinder women’s full participation in the economy and in decision-making. An important fraction of the gains from the past two decades have been eroded because of the recent economic and financial crisis. During the Meeting, member States examined the reasons behind these trends and shared policy experiences and best practices in addressing these issues from their countries. The needs of women from vulnerable groups, such as women refugees, victims of trafficking and autistic women were also represented at the Meeting through side events. The Regional Review was preceded by a 3-day NGO Forum, whose recommendations provided a voice from the civil society to the deliberations at the Meeting.

Speaking at the opening session alongside UN Women’s Executive Director Phumzile Mlambo-Ngcuka and HRH Crown Princess Mary of Denmark, UNECE Executive Secretary Christian Friis Bach called for all stakeholders to accelerate their efforts to empower women and achieve gender equality, so that all women can live in safety and with dignity.

It was widely agreed at the Meeting that all stakeholders have crucial roles to play in the ongoing implementation of the Beijing Platform for Action.

Governments, as part of their continued commitment to empowering women, must implement policies and actions that promote gender equality. Quotas to increase women’s representation on corporate boards and in politics, gender targets in companies applying for public procurement contracts, and initiatives to promote women’s entrepreneurship, were among the measures discussed. Governments must also make sure that the relevant legislation is enforced, provide sufficient funds to national and local gender mechanisms, and step up efforts to collect sex-disaggregated statistics in order to better monitor the progress and challenges. Gender considerations must be mainstreamed through all policymaking, including budgeting, labor and social policies.

The private sector must commit to eradicating the gender pay gap and to increasing women’s presence in the managerial ranks and on corporate boards.

The civil society and academia, along with other stakeholders, must work to eradicate discriminatory stereotypes, which so often lead to burdening solely women with housework and childcare duties. These stereotypes also constrain the occupational choices of both women and men.

Men and boys must also play their part in achieving gender equality, as violence against women and harmful stereotypes cannot be eradicated without a strong commitment from both genders.

Collaboration between stakeholders has proven to be a critical factor in the areas where progress has been made. All countries agreed that this collaboration must continue. Countries also issued a strong call for a stand-alone Sustainable Development Goal on gender equality and targeted gender indicators throughout the whole post-2015 development agenda.

In follow-up to the Meeting, the co-chairs’ conclusions, together with the civil society recommendations from the NGO Forum, will be submitted to the 59th session of the Commission on the Status of Women, as a regional input to the global Beijing+20 review.

The co-chairs’ conclusions, along with all the other Meeting documents, can be accessed at: http://www.unece.org/index.php?id=35329